RUCK picks our star performers from the fifth round of the Aviva Premiership.

Team of the Round: Although there were big wins for Saracens, Exeter and Wasps, it was Newcastle’s draw away at Sale that signalled the greatest improvement. The Falcons looked very poor in their four opening Premiership games, failing to pick up a single point, but on Saturday look like a  much more capable and organised group with their on-field leaders Nili Latu and Will Welch finally starting to get their boys playing as one organised, resolute unit. The outscored the Sharks two tries to nil and although Danny Cipriani had a late chance to snatch the win for the hosts, a draw was at least the visitors deserved in truth.

Player of the Round: Exeter fly-half Gareth Steenson is the immediate name that comes to mind as his standout performance and 21-point haul dragged the Chiefs to a narrow home win against Harlequins at Sandy Park on Saturday. The number 10 took charge of his team and architected all the hosts attacking play while also performed a key role from the tee, kicking 16 points while he also finished his try very well. 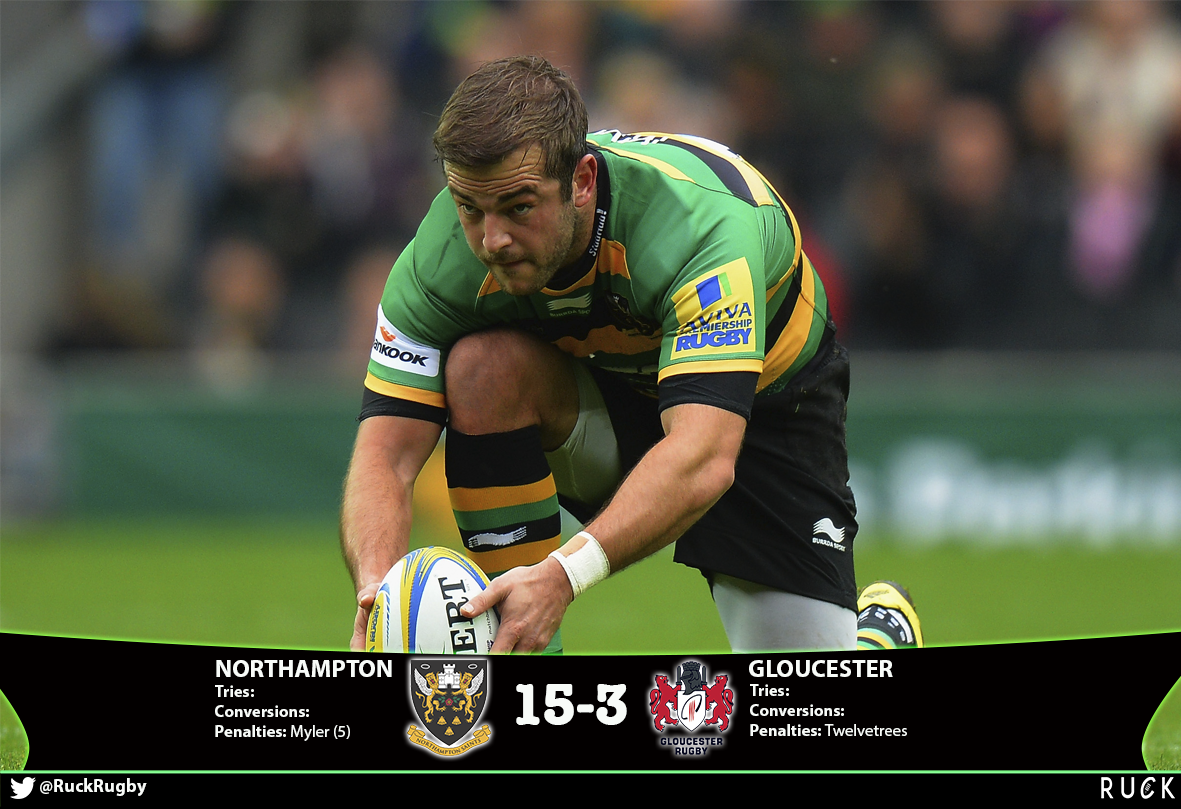 A dominant Northampton pack crushed the fight out of Gloucester to secure a 15-3 Aviva Premiership victory on Friday evening. Kieran Brookes, who has struggled for consistency in the past, sent out a clear message to England head coach, Eddie Jones, as he carried powerfully while also decimating the Cherry and Whites scrum.

The game was far from pretty throughout, but the individual class of Brookes in the pack, Ben Foden in the backs and Stephen Myler from the tee kept Northampton on the front foot, helping them to a narrow 9-3 lead at half-time.

Northampton then edged to the win through two further Myler penalties while their defence had to be at their concentrated best with the visitors wing pairing of Charlie Sharples and Jonny May looking to punish them on the break.

The hosts did add some excitement to the overall dull evening as they introduced Springbok legend Victor Matfield to the Franklin’s Gardens faithful, with the lock coming on as a replacement in the second-half. However, there were concerns for the hosts Luther Burrell, who limped off, and now could join fellow England and Saints teammate Courtney Lawes on the treatment table. 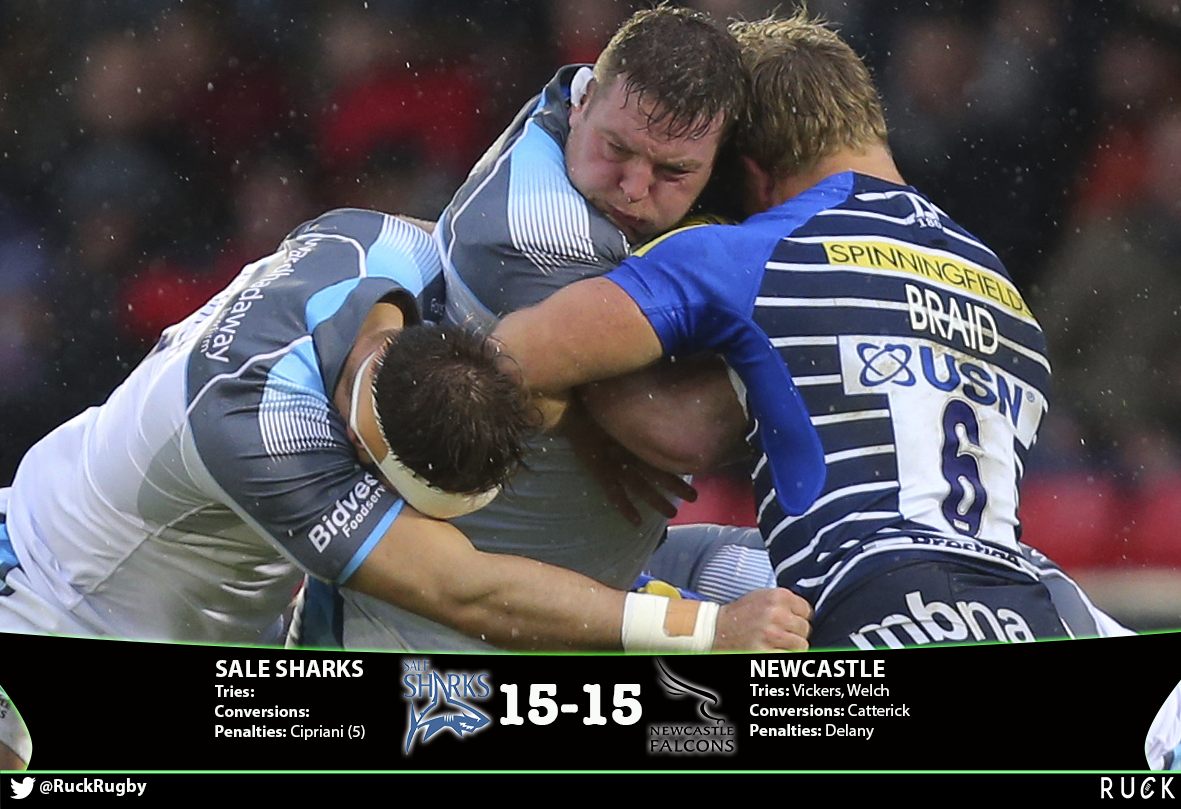 It was far from pretty and at times maddeningly frustrating with neither side in the end having the individual class to take maximum points from the clash with the pair sharing the spoils at the AJ Bell Stadium on Saturday. Danny Cipriani’s last-gasp kick drifted wide as the hosts almost snatched victory but in truth a draw was probably a fair result.

The number 10, who was left out of England’s Rugby World Cup squad, almost kicked the hosts to a narrow victory if not for a late converted try from Falcons Captain Will Welch.

Newcastle, who had not recorded a single point in their opening four Aviva premiership games so far, were much improved and were well worth their share of the spoils on the day. 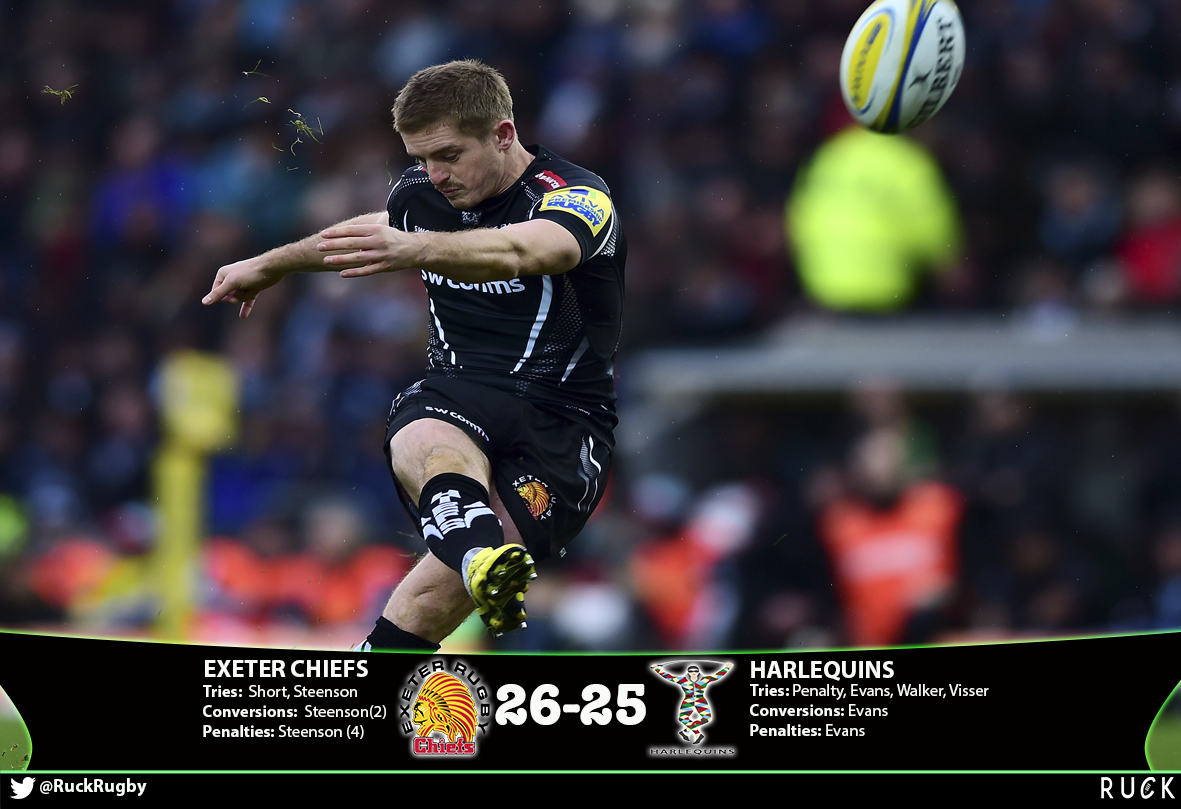 Exeter Chiefs came from behind against Harlequins to ensure they continued their impressive start to the Aviva Premiership with a fourth consecutive win. Gareth Steenson starred for the hosts with a 21-point haul, made up of four penalties, two conversions and a try as the fly-half seemingly tried to win the game all on his own.

Quins had run-in three tries before half-time but some sublime kicking from Steenson paired with James Short’s try ensured the hosts led narrowly by a single point at the break.

The Exeter number 10 then touched down a try before converting to recapture the hosts the lead following a Nick Evans penalty for Quins prior.

Tim Visser then brought the visitors back within touching distance with Quins fourth try, which secured the bonus-point, but the brave hosts would hold on for the narrow victory. 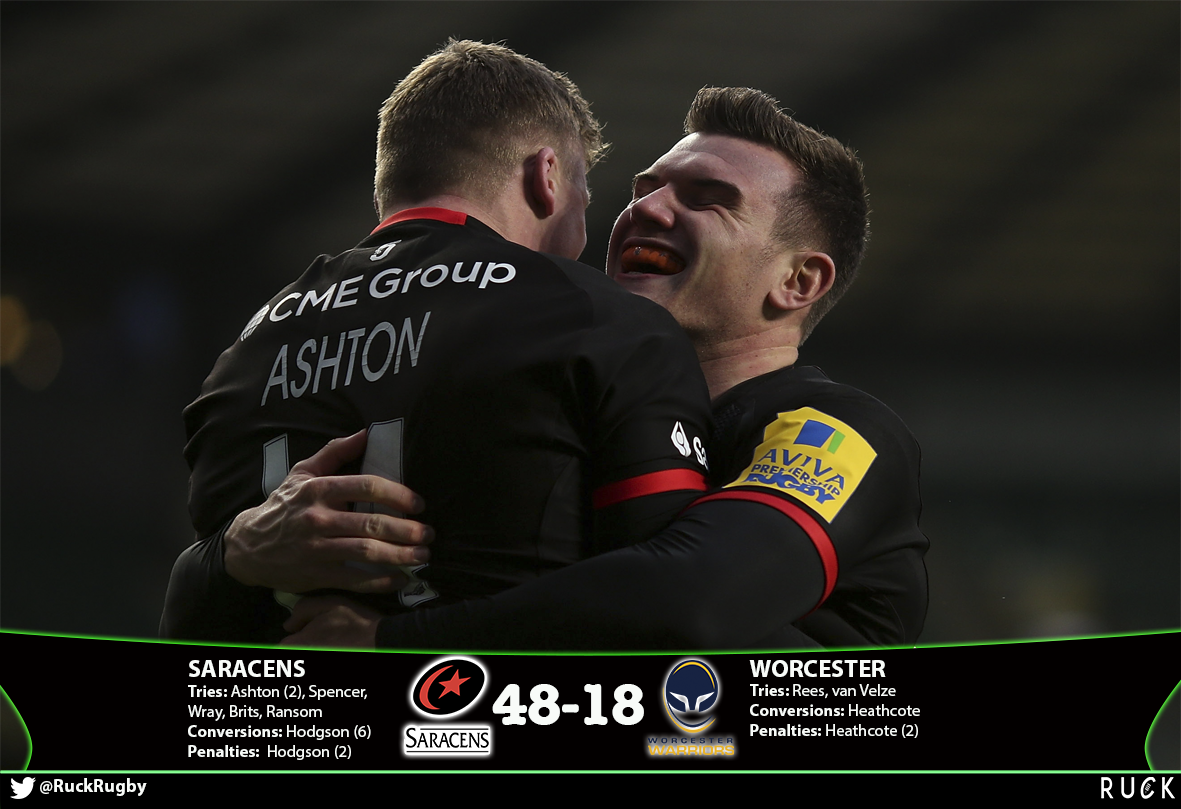 Saracens thrashed Worcester at Twickenham on Saturday, outplaying the Warriors with a perfect example of free-flowing rugby to take maximum points and record a 10th consecutive win in all competitions.

Worcester, who have never won n game of XV’s at the South-West London stadium, never looked like getting anything from the game as Saracens raced in for their first of their six tries after just four minutes when wing-wizard Chris Ashton, who would go onto score a brace, crashed over.

Sarries rugby was fast, furious and fun as they repetitively stretched the Warriors before racing in to score almost on demand. Ben Spencer, Jackson Wray, Schalk Brits and Ben Ransom all touched down for Saracens as they eased to victory.

Saracens fly-half Charlie Hodgson, who announced he will retire at the end of the season, made up the rest of Sarries total, kicking 18 points to take his Premiership career tally past 2,500.

There were some bright moments for Worcester as Joe Rees and GJ van Velze scored late consolations to send their supporters home with at least something to cheer. 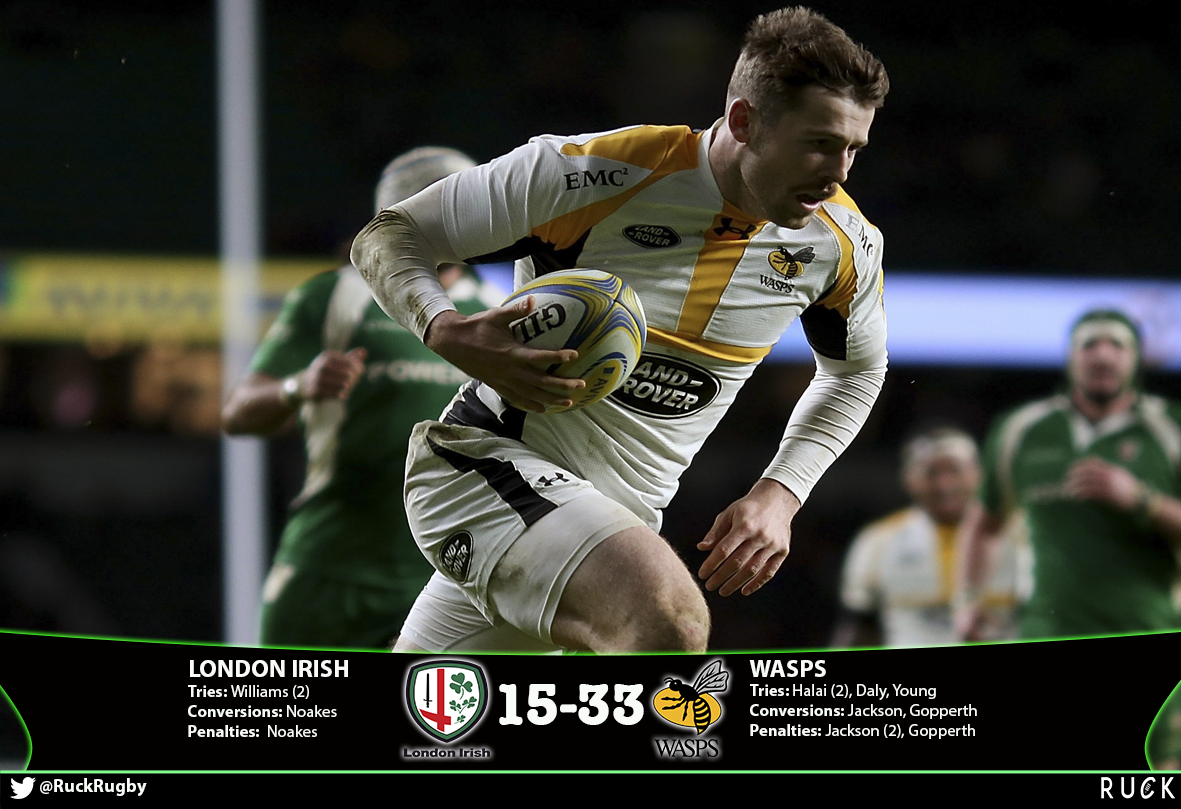 Frank Halai scored twice as Wasps picked up their third successive win with a steely 33-15 bonus-point win against London Irish at Twickenham.

Ruaridh Jackson kicked two penalties either side of one from Chris Noakes in a quiet opening quarter, but Halai notched the game’s first try on 38 minutes before Johnny Williams responded with a five-pointer of his own on the stroke of half time.

Wasps stretched their advantage soon after the restart with Elliot Daly going in on 50 minutes, Jackson converting, ahead of a Jimmy Gopperth penalty. But, within seconds, the Exiles had their second try, Williams bagging his second which was improved by Noakes.

But 15-21 was as good as it got for Tom Coventry and his still point-less Premiership men as Thomas Young and Halai ran in two more scores as the minutes ticked down, a further Gopperth goal adding extra gloss to the scoreline. 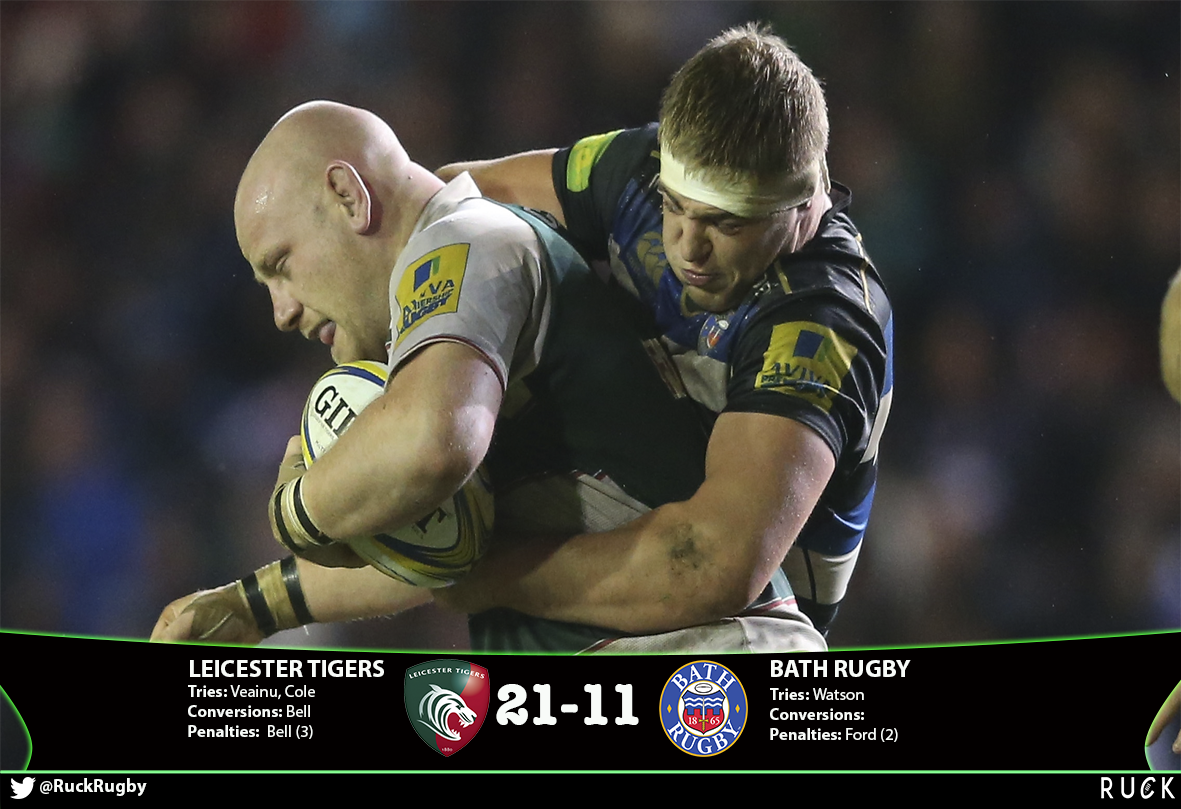 Dan Cole scored his first try in six years as Leicester enjoyed a hard-earned 21-11 win over Bath at Welford Road.

Bath’s Anthony Watson opened the scoring with a try on eight minutes, but Tommy Bell hit back with pair of penalties, either side of a Telusa Veainu try which handed Tigers an 11-5 half-time lead.

But Bath were level soon after the restart thanks to two George Ford penalties which made it 11 apiece on 50 minutes.

In wet conditions, the boot of Bell was then the only difference between the sides, his 66th-minute goal putting Tigers 14-11 up, however Cole was the unlikely late hero, scoring with seven minutes to play, Bell with the extras to seal the points.