The HIA was introduced for the welfare of players, bur now it seems the HIA is being tactically abused.

More dubious calls from the French doctors saw two players leave the pitch with supposed HIA’s despite obviously having knee injuries and fans were very annoyed.

Ireland went on to win the game thanks to a last-gasp drop-goal, but that doesn’t mean the issue should be forgotten.

Just because we won with an INCREDIBLE 42 METER drop goal that HIA decision shouldn’t get swept under the carpet. It was nothing short of a disgrace!!!

That’s an injury replacement. No HIA

Hmmmmm? Not sure that’s a HIA? Nigel Owens can only make the decision based on the info he’s given. Could tell he wasn’t convinced!

That’s 2 years in a row that they have abused the HIA protocols to gain a competitive advantage on the field.

Another World Rugby inquiry is needed in to that incident.#IREvFRA

On what planet is that HIA, are his brains in his kneecaps now? #FRAvIRL

Are France trying one on there? An HIA after a knee to knee collision???

HIA/ replacement at this stage is important.

France love the use of the HIA, I call bullsh*t but they get away with it. Nige asked the right questions and has to take the docs words

Totally gutted that they are saying hrh for France, bloke hurt his knee not head #France should be down a man now…. #Rugby

No way was that a head injury…zut alors ref! #6Nations2018 #FRAvIRE

Did the French Team Doctor not study biology? When is an hia not an hia? When it’s a blatant knee injury but you want to cheat!

@WorldRugby the HIA was introduced for the welfare of players, now HIA is being tactically abused #FRAvIRE #fairplay #integrity #ethos 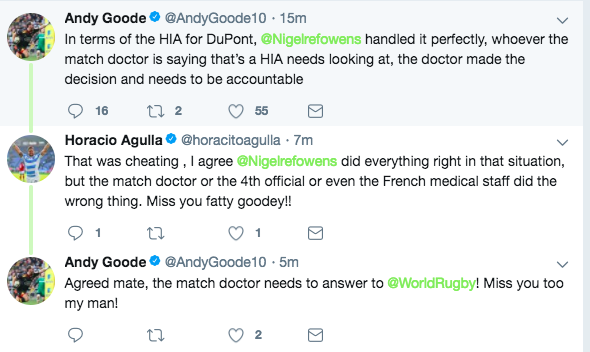 LIST: 5 players you didn’t know could have played for England

Owen Farrell & the 8 Highest-Paid Players in the Lions squad