Could James Haskell be on his way to Harlequins?

The England and Wasps flanker, who is out of contract at the end of the season, has been linked with a number of Premiership clubs with Northampton and Worcester reportedly leading the chase.

However, his Twitter activity, which saw him recently follow Quins, could be a hint that the 33-year-old could be making a shock switch to London. 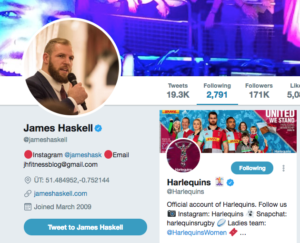 The only other Premiership club he follows on Twitter is his current employers, Wasps.

He’d be linking up with England colleagues Chris Robshaw, Mike Brown, Danny Care, Joe Marler, Kyle Sinckler and more if he did move to Twickenham Stoop.

Haskell is understood to have offers from both France and Japan but wants to stay in the Premiership in order to keep his chances of Rugby World Cup selection alive.