Eddie Jones has replaced George Ford with Owen Farrell at fly-half for England’s opening Test against Australia in Brisbane on Saturday.

“We aim to win every Test match we play and I am pleased with our preparation since we landed in Australia. The group have acclimatised well, trained hard and there’s a buzz around the camp.”

England have never won a Test series in Australia and Jones urged his side to get the southern hemisphere tour off to a winning start and “create history”.

“If you look at England’s record in Australia it’s pretty ordinary,” he said.

“We’ve only ever won three games in Australia so it’s a great opportunity to put down a marker and create history. It’s important we get off to a positive start and we’ll arrive in Brisbane ready to play physical and aggressive rugby.

We’re excited to be playing against a strong Australian team in their backyard. The Wallabies are ranked second in the world and have the World Rugby coach of the year, so that’s why they start as favourites. There’s a lot of expectation on them to win the series convincingly.

“We have a young squad with an average age of 24 so we are still developing and improving. It’ll be a great challenge for us and one we’re looking forward to meeting head on.”

A third of the starting XV comprised of Saracens players, who have already completed a domestic and European trophy double, including second-row partners Maro Itoje and George Kruis while Farrell all-round form has earned him the No10 jersey.

Despite winning the Premiership Player of the Year, Sarries fullback Alex Goode though again finds himself named among the replacements. 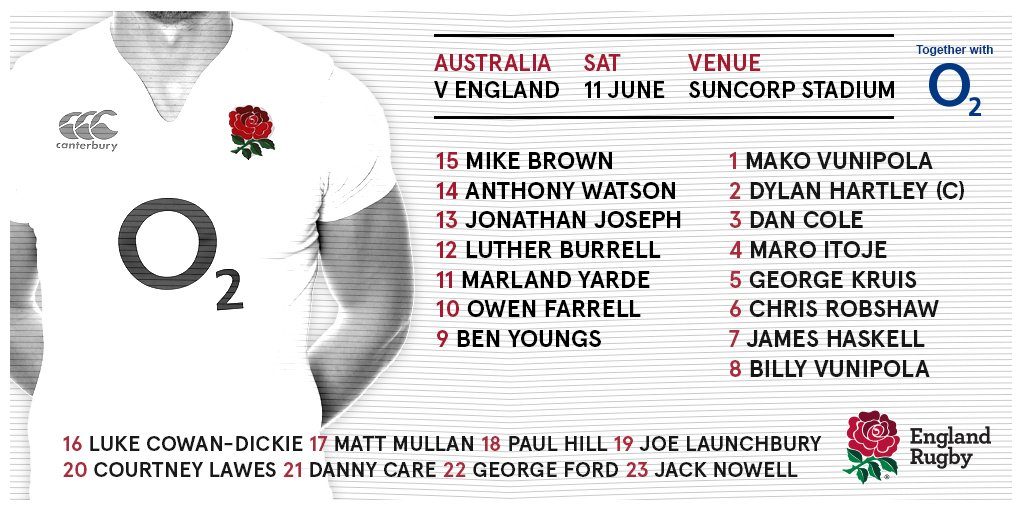