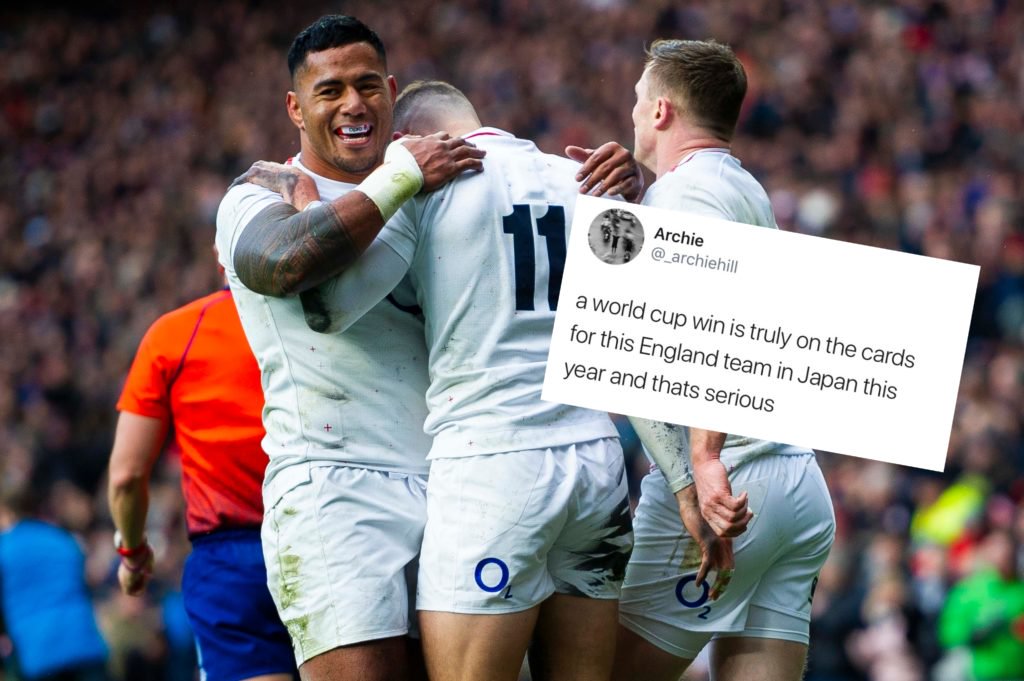 England were on fire at Twickenham on Saturday as they rolled through a lacklustre France side.

France, meanwhile, have work to do ahead of their clash with Scotland in Paris in two weeks’ time.

Matt Dawson had some high praise…

The stats back it up…

8 – @EnglandRugby have scored a try within the opening four minutes of eight of their 14 Tests since the beginning of 2018, Jonny May crossing for four of those eight tries. Instant. pic.twitter.com/fZ9CCrvmxw

3 – Jonny May is the first @EnglandRugby player to score a hat-trick against France since Jake Jacob back in 1924. Flying.

Jonny May wondering why he isn’t wearing a training bib.

4 – Jonny May has scored in four consecutive #GuinnessSixNations appearances, only Will Greenwood, Mark Cueto and Anthony Watson have scored in as many consecutive matches in the tournament for England since 2000. Finisher. pic.twitter.com/hb8AKj9CxV

Owen Farrell leads from the front…

The England captain put in an almost faultless performance at HQ.

Wouldn’t you just love to play in a team with Owen Farrell … 100% all the time, drives the team on … name a better player on the planet at the moment?

Owen Farrell cool as a cucumber band calming his team-mates down.

What parralel dimension have I landed in?!?!#ENGvFRA

This three-phase stretch encapsulates England at their most threatening. Off-the-top ball to Billy Vunipola, Mako Vunipola carries from next phase. Third phase you have Billy Vunipola with Manu Tuilagi on his shoulder and Owen Farrell in behind. Utterly heinous to defend. pic.twitter.com/5gEYmrRHha

England peaking in a World Cup year 👀 The hype is real!

England demolished France by a score of 44-8 to take command of the Six Nations table. World Cup year and England are looking ruthless… Is it coming home?? 🏴󠁧󠁢󠁥󠁮󠁧󠁿🏆

Genuinely think, when England are in their element we are playing better than the 2016 year, Eddie Jones knows exactly what to do bring on the world cup

#ENGvFRA Looking to lay down a marker in all Six Nations games, England,Jones,Whole Squad in a world cup year, Also remind northern/southern hemisphere England a major force in world rugby.🏉

Where has this England team been for the past 18 months? All part of Eddie Jones devious plan to play shit for a year and catch the rest unawares at the World Cup? Starting to look the real deal! #ENGvFRA

Possibly the best I have seen @EnglandRugby play, both this week and last, anyone else getting a tad excited about it being a World Cup year? #England #Rugby

FT Eng 44 Fra 8
England continue their magnificent form of last week. I almost feel like they didn’t even get into top gear, that there is more to come. This bodes well in a World Cup year. I can’t wait for the next match in two weeks time against Wales.#6NATIONS

England will provide a big challenge to the All Blacks in the World Cup later this year.
What a performance today. They absolutely decimated France 44-8.

Well done England! Against all odds the foundations are being laid for the World Cup later this year! #CarryThemHome #englandrugby 🌹🏉

Though the non-English amongst us aren’t best pleased…

England in a World Cup year always get their shit together. 👎🏻🙄#6nations2019

Looks like England are peaking in a World Cup year… pic.twitter.com/5NZZGXzKsY

England having a clue about rugby union, in a world cup year 🤦🏽‍♂️🤦🏽‍♂️🤦🏽‍♂️