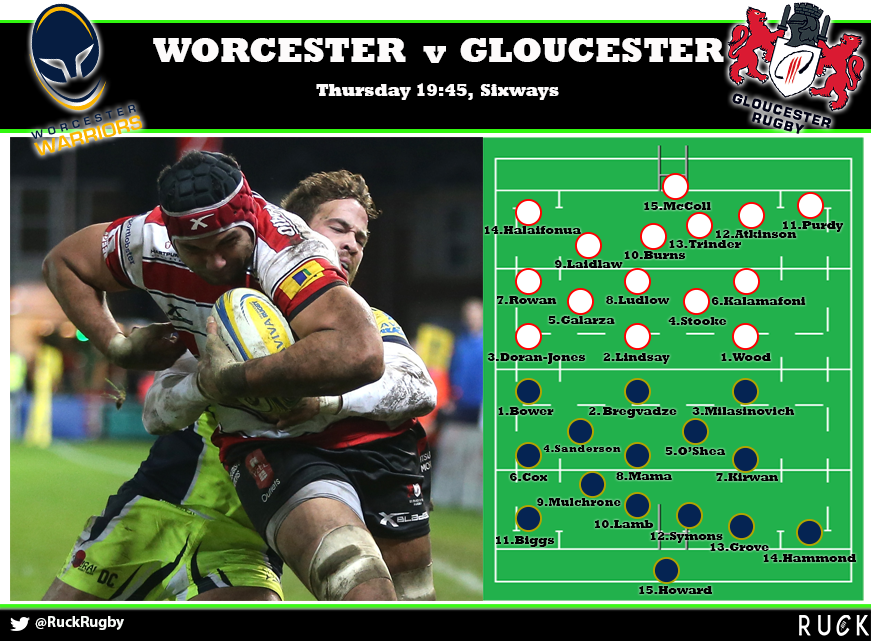 Andy Symons will make his first appearance for eight months after recovering from a knee injury as Worcester host Gloucester in the European Challenge Cup at Sixways on Thursday night.

The 24-year-old centre played a key role in the Warriors promotion from the Championship last season and will be a welcome return to Worcester’s starting and is one four changes from their last European match at Zebre, which they lost 27-8 last month.

Scrum-half Charlie Mulchrone comes into lead the side, while wing Tom Biggs and flanker Matt Cox also come in to complete the hosts changes.

Worcester Head coach Carl Hogg said: “We’ve got one or two returning from injury that is great and it’s an opportunity for those who haven’t had a huge amount of Aviva Premiership game time to stick their hands up.

“We want to create healthy competition across the squad.

“Symons has had a very intensive rehab programme and he’s looking fit and sharp so we’re looking forward to seeing him out there again on Thursday night.

“We know we have to win our home games and Gloucester travel well and will be confident. But we know the challenge in front of us and it’s one we’re relishing.”

Meanwhile, Gloucester have made the perfect start to their title defence lead the pool with two wins from two matches.

Scotland Captain Greig Laidlaw is back for the Cherry and Whites while centre Henry Trinder makes his return for his first start of the season.

Prop Nick Wood is also in the starting XV, while second-rower Mariano Galarza plays, having signed a new deal.

The Pool Five fixture between these two French rivals will see Agen look to pick up their first victory of this season’s Challenge Cup on Thursday evening at Stade Armandle.

Disappointing defeats to London Irish and Edinburgh mean they sit cemented to the foot of the group while Grenoble has one victory against the Exiles to their name, meaning they have an outside chance of progression.

Agen have made several changes to the side that lost heavily at Toulon in the Top 14 last week as Burton Francis and Johan Sadie are two players given the week off from the backline while Luke Hamilton also drops out of the squad. Dave Ryan is moved to the bench and replaced by Canadian Jason Marshall at tighthead prop.

Meanwhile, Grenoble have also opted to rest crucial such as players Gio Aplon, Jonathan Wisniewski, Rory Grice and Peter Kimlin are not named in their matchday 23 ahead of the consecutive matches between the two French nations.