British and Irish Lions and Wales centre Jonathan Davies used his spare time during Friday’s snowstorm to ferry patients, doctors and nurses to and from the hospital in Cardiff.

Injured Davies could not travel to his training base because of closed roads. The Scarlets player earned praise for his public-spirited efforts. 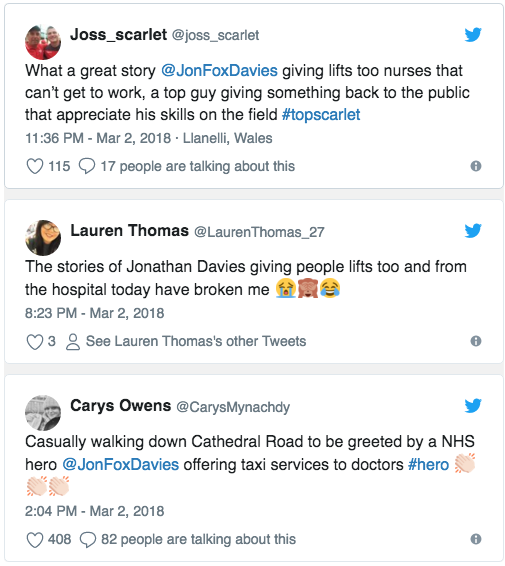 Davies said he made around 12 trips to Cardiff’s main hospital, adding he “wouldn’t be able to just look at” his 4×4 in such circumstances.

He added: “The roads were quite bad, but as long as you took your time you were safe enough.

“It was difficult in and around the side-roads, but the work people had done to clear it and grit it, it’s a massive effort by everyone, really.

“I didn’t get down to training in Llanelli and we have a ‘next door’ app for the area and my girlfriend put it on that we’ve got a 4×4 and if anyone needed lifts to and from work the hospital, we were more than happy to help out.

“And then they got in touch with the Heath (University Hospital of Wales, Cardiff).

“It was just taking patients and doctors to and from the hospital and to their homes.