Leicester second row Will Spencer has been banned for four weeks after being sent off for a dangerous tackle in Sunday’s Premiership match with Wasps. 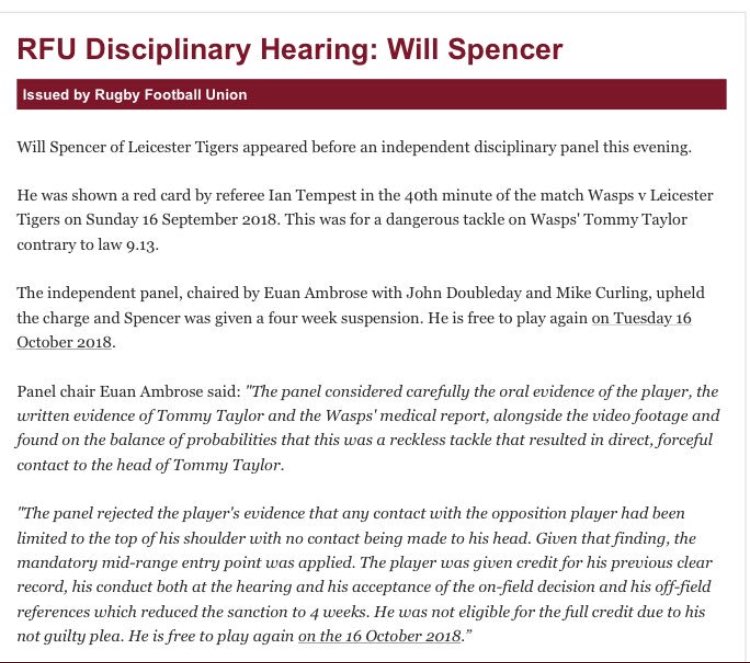 A number of other players and coaches have also criticised the decision.

However, following a lengthy hearing, an independent disciplinary panel ruled Spencer was guilty of a reckless tackle and upheld the charge.

Chair Euan Ambrose said: “The Panel considered carefully the oral evidence of the player, the written evidence of Tommy Taylor and the Wasps medical report, alongside the video footage.

🗣 “We have a responsibility to tackle low.”

Will Spencer was shown a red card for a high tackle, but not everybody agrees…

We haven’t heard the last of this one 👀 pic.twitter.com/ynedwRAflU

“(They) found on the balance of probabilities that this was a reckless tackle that resulted in direct, forceful contact to the head of Tommy Taylor.

“The Panel rejected the player’s evidence that any contact with the opposition player had been limited to the top of his shoulder, with no contact being made to his head. Given that finding, the mandatory mid-range entry point was applied.

“The player was given credit for his previous clear record, his conduct both at the hearing and his acceptance of the on-field decision and his off-field references, which reduced the sanction to four weeks.

“He was not eligible for the full credit due to his not guilty plea.”

QUIZ: Can you guess the rugby players autograph?

LIST: The three unlikely friendships from the 2021 Lions tour