Leicester Tigers may yet be in trouble after not subjecting flanker Dominic Ryan to a head injury assessment (HIA).

An independent concussion review group will review the incident after Ryan stayed down when his head appeared to collide with George North’s elbow as the former Leinster man attempted a cover tackle.

Social media reacted, with rugby writer among those worried about Day’s well being.

They need to get Dominic Ryan off the pitch now. An incident like that, with suspected LOC, can’t go unnoticed.

How is Dominic Ryan not going for a HIA? Negligent from Tigers, clearly unsteady on his feet. #NORvLEI

There was a witch hunt for Saints medical team after North’s treatment at Welford Road, but the same voices r very quiet about Dominic Ryan.

There was a witch hunt for Saints medical team after North’s treatment at Welford Road, but the same voices r very quiet about Dominic Ryan.

Two Tigers medics with referee JP Doyle in close attendance made the call that the 27 year-old was alright to continue, despite looking fairly dazed.

The forward had earlier come on for an injured Brendon O’Connor in the opening seconds of the second half. Matters had been complicated for Tigers because Ryan was hurt while Mike Williams, was serving 10 minutes in the sin bin. 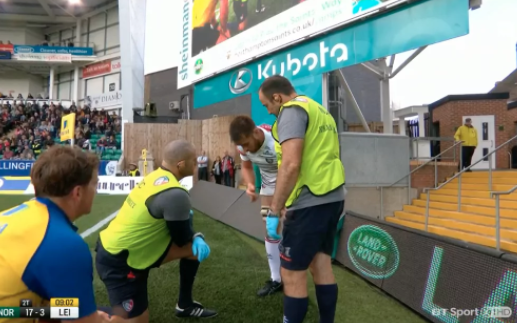 Williams himself was a temporary replacement for Graham Kitchener, who had left the field for an HIA. Options to cover for Ryan’s absence were therefore limited, perhaps suggesting he was kept on .

Interviewed by BT Sport commentator Alastair Eykyn later in the second half, Leicester assistant coach Geordan Murphy said that the Tigers management had reviewed footage on the sideline and, helped by the diagnosis of pitchside medics, come to the conclusion that Ryan was “winded”.

The RFU are currently in the process of looking over the second round of fixtures.

Should they feel Ryan’s incident merits further action, Leicester would have 48 hours to respond.