After seeing out his contract extension with Toulon, a fresh deal wasn’t forthcoming and when Halfpenny flew to New Zealand to represent the Lions ahead of the Top 14 final, owner Mourad Boudjellal closed that particular door.

Halfpenny’s predicament has now been brewing for months, but Zebre and Italy second-row George Biagi has tweeted him with a fantastic offer.

“We need a player for the extreme role – wrote the 28-year-old –   and the Zebre have a great offer for you: tanning time, eating ham and playing. 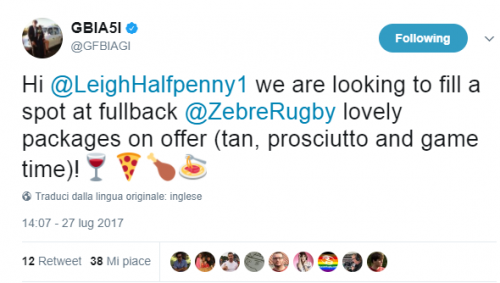 Despite the difficult start of the season in Parma, with the complex transition from the old company to the new, full federal control, the players have retained a good sense of humour.

At this rate, Halfpenny should probably take any offer seriously after both Bath and Wasps ruled themselves out of the running.