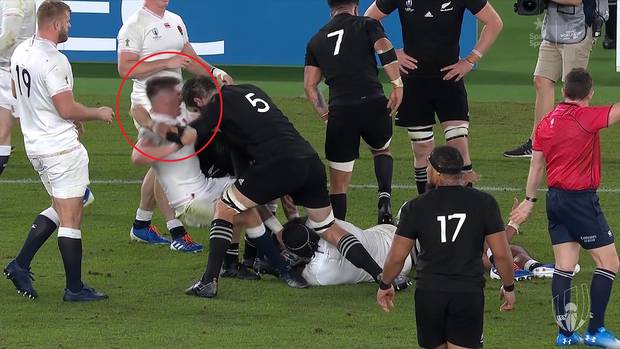 The Saracens fly-half led his team to the Rugby World Cup final thanks to a 19-7 semifinal win over the All Blacks.

After receiving a hand to the face from All Blacks lock Sam Whitelock in the 67th minute of the match, the New Zealand Herald says ‘Farrell lay on the ground holding his head in what appeared to be an attempt to exaggerate the severity of the contact.’

The Herald even reported that: “All Blacks halfback TJ Perenara was even picked up on the referee’s microphone asking Farrell if he was playing in the Premier League instead of the Rugby World Cup.”

Some fans also took to Twitter to vent about the incident.

“Don’t let the England #RWC2019 semi-final win distract you from the fact that Owen Farrell went all soccer mode when he got PUSHED by Sam Whitelock,” one fan posted on Twitter. “Man was acting like he got a shoulder to the head.”

“I am a huge admirer of Owen Farrell, but the way he reacted after Sam Whitelock pushed him on the forehead was embarrassing!” said another. “Disappointed also Nigel Owens didn’t give it the old …. “This is not soccer….” to him.