Winger Waisake Naholo, who was initially ruled out the Rugby World Cup with a broken leg, has been named in the All Blacks starting XV for their clash against Georgia in Cardiff on Friday.

The Highlanders winger, who suffered a hairline fracture to his fibula on his Test debut against Argentina, has recovered within three months to take his place amongst the squad and is now set to earn his second cap.

New Zealand, who are the unbeaten Pool C leaders, have began their title defence with wins against Argentina and Namibia with little seeming to be in their way as they start to plan for a trip to Cardiff to face either Ireland or France in the quarter-finals.

Georgia, who against the odds overcame Tonga in their opening match, were embarrassed 54-9 at the hands of Argentina last Friday, but will be still aiming to possibly finish in third place, which would ensure qualification for the next installment of the competition in four years time.

Steve Hansen, the New Zealand head coach, has made ten changes to the All Black starting XV that thrashed Namibia to field an almost full-strength side.

Captain Richie McCaw is one of the players coming back in and the skipper has insisted its time for the All Blacks to “step up” their performances.

“Performance-wise, we need to take a step up,” said McCaw. “We have all had a run in the first two games, so there are no excuses for not being ready to go.

“There has been a bit of an edge this week in terms of putting right the things that were a little bit off in those opening two games.

“If we get them right, we will hopefully get a good performance.”

Sonny Bill Williams retains his place at inside centre due to Ma’a Nonu struggling with an injury.

Back Colin Slade (hamstring), flanker Liam Messam (calf) and fly-half Beauden Barrett have also not been considered for a starting spot due to niggling injuries.

Man of the match against Namibia Nehe Milner-Skudder is rested for the game at the Millennium Stadium, but Julian Savea does start for the All Blacks once again.

Meanwhile, Georgia have made 11 changes, fielding a mainly second-string team as they are concentrating on trying to win their last pool game against Namibia on 7th October, which could still be enough to have them finish third in the Pool.

Mamuka Gorgodze shifts to the flank as the only survivor from the pack that faced with Argentina last week.

Of the changes, props Karlen Asieshvili and Levan Chilachava are both established in the Top 14, while hooker Shalva Mamukashvili plays in the Premiership for Sale Sharks. The rest of the squad is rather inexperienced at the top level.

RUCK Prediction
The reigning champions have fielded just about their strongest team meaning they should easily see off Georgia, picking up a bonus point in the process. Georgia know that their finishing spot will depend on their result against Namibia in their final game and not against the All Blacks so will be trying to avoid picking up any injuries.
New Zealand by 70 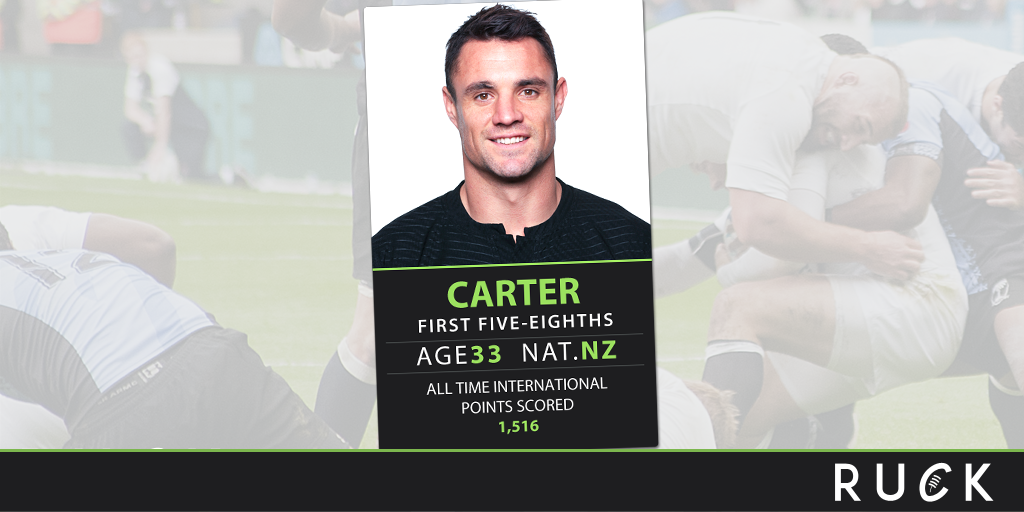 One of rugby’s true superstars is legendary All Black Dan Carter, who will be hoping to build up some form ahead of the knockout rounds with a good display against Georgia. The reliable goalkicker is the complete package, including great speed, defensive strength and a dangerous side-step.

Toulon prop Chilachava is an excellent scrummager and puts himself about, making himself a nuisance at the breakdown. At just 24 he has established himself as a key player for both club and country, so expect him to give Wyatt Crockett a troublesome evenings work.