Exeter Chiefs had won just two away games in the Premiership since last November, but today they put that record to bed with a dominant bonus-point victory against Newcastle at Kingston Park.

Five first half tries from Exeter, made up of scores from Will Chudley, Julian Salvi, Matt Jess and a brace from Don Armand, blew the hosts away and secured the bonus point in the process.

A second score from Moray Low for the visitors completed Newcastle’s misery with Gareth Steenson completing the Chiefs total with an 11-point haul from the tee.

Meanwhile the Falcons, who have now lost eight of their last nine meetings against the Chiefs, failed to score a try in a Premiership match for the first time since a trip to London Irish in April 2014.

The day started brightly for Falcons as fly-half Mike Delany had initially given the hosts the lead from the tee, but it was all downhill from there for the North East based club.

Chudley was first to cross the whitewash for the visitors after charging down Delany’s attempted clearance after seven minutes. Steenson added the extras, 3-7

Chiefs then grabbed their second score of the opening quarter when back-rower Salvi, who recently joined from Leicester Tigers, bundled his way over from behind the pack. Steenson converted again to stretch Exeter’s lead to 12 points.

The visitors ever expanding-advantage continued to grow after 21 minutes when Don Armand touched down at the back of a rolling maul. Steenson’s attempted conversion hit the post, but the Chiefs held a commanding lead, 3-19.

Exeter secured the bonus point just after the half hour when Newcastle’s calamitous defence was unlocked for Matt Jess to touch down on his 100th Premiership appearance. Steenson’s attempt to add the extras again hit the post, meaning the visitors had built up an enormous 21-point lead.

Half-time didn’t come quick enough for the Falcons as there was time right at the end of the opening 40 for Exeter to pinch another turnover and subsequently score another try. Henrey Slade was the architect, drawing the tackle before offloading to Don Armand, who dived over for his second try. Steenson made no mistake in adding the extras this time, 3-31.

The Falcons did manage to cross the whitewash after the restart through new addition Belisario Agulla, but the score was wiped off after a trip to the TMO uncovered a knock-on in the build-up.

Exteer then added their sixth score to make the win even more secure after 68 minutes through Moray Low. The prop picked up to make the crucial move and squirm over the line following some intense pressure from the Chiefs deep into the Falcons 22.

Steenson then ended the game with a sweetly struck penalty, 3-41. 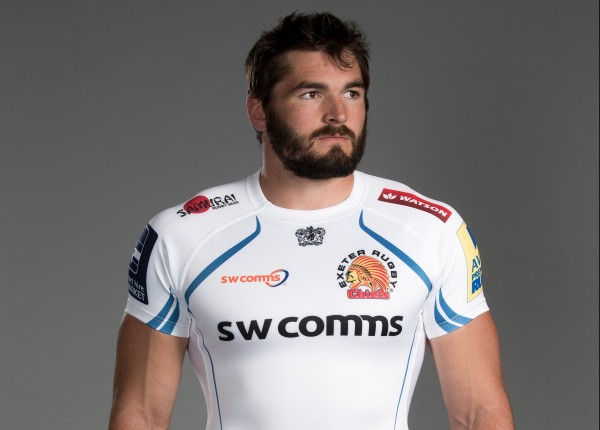 The number 8 led the charge for the Chiefs with his dominant performance in the back-row where he made 12 carries, made 47 metres and got two tries for his troubles.