Northampton 24-30 Leicester: Tigers move closer to securing a top-four finish with a narrow victory against Saints

Leicester Tigers have one foot in the Aviva Premiership playoffs after they beat their East Midlands rivals Northampton 30-24 at Franklin’s Gardens.

Tries from Harry Thacker and Vereniki Goneva put the Tigers 17-10 up at the break, with Teimana Harrison replying.

Freddie Burns kicked penalties either side of George Pisi’s score, but a penalty from Stephen Myler brought the hosts back to within two points.

Saracens 22-12 Harlequins: Sarries see off Quins in battle at Wembley

Two first-half tries from Chris Ashton helped league leaders Saracens to a 22-12 victory over Harlequins in front of 80,000 fans at Wembley Stadium.

Eddie Jones was not present to see Ashton’s finishing – the England head coach was at Stamford Bridge to watch Chelsea face Manchester City – but at this current rate the rugby league convert is a certainty to tour Australia in June after missing the Six Nations.

Grand Slam winner George Kruis also added his name to the scoresheet, while all 12 of Quins’ points came from Botica off the tee.

Fly-half Russell and wing Lee Jones crossed twice each as Glasgow extended their winning run to eight Guinness Pro12 games with a seven-try hammering of Scarlets at Parc y Scarlets.

Seven tries in the Parma sunshine were enough to lift Ulster into a playoff position in the Pro12 with two games remaining.

Les Kiss’ side had their bonus point wrapped up by half-time and added three further tries after the break.

Ulster are fourth, two points ahead of the Scarlets and have a week off before facing league leaders Leinster at the Kingspan Stadium.

Connacht moved level on points with leaders Leinster at the top of the Pro12 table thanks to a bonus-point win over Munster at the Sportsground.

Adeolokun and Finlay Bealham added touchdowns after the break while Shane O’Leary kicked a total of 15 points.

The six-try tally sees him equal Ryan Constable’s record haul for Saracens against Bedford in 2000.

Wade now has 11 tries in the Premiership this season and is two behind Thomas Waldrom at the top of the league’s try-scoring charts.

Despite the home side scoring six tries themselves, a total of eight scored by visitors Wasps saw them seal a 54-35 victory at Sixways.

Heyneke Meyer is the latest name to be linked to becoming Harlequins director of rugby after Gregor Townsend publically distanced himself from the position yesterday.

He led South Africa to a third-place finish at the Rugby World Cup last Autumn, but that campaign will be forever defined by their group stage defeat to Japan.

Nevertheless, there has been no shortage of offers for his services since his resignation, particularly from Japan, and Meyer is currently understood to be weighing up several roles on his game farm in the Free State.

Japan’s Sunwolves must “start from scratch” after their humiliating 92-17 Super Rugby defeat to the Cheetahs in Bloemfontein on Saturday; captain Shota Horie has said. 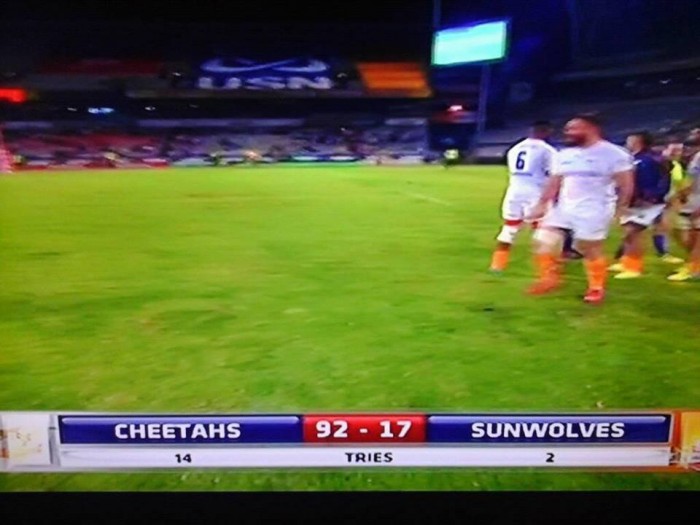 Richmond has secured promotion to the Championship with a victory over Hartpury College on Saturday.

The capital club had champagne on ice in the away dressing room before kick-off. Such was their confidence that they would seal the National One title at the college grounds, they took their hosts on at full tilt from the outset.

“Finished for a while” – Alun Wyn Jones slammed by controversial pundit