Romania beat Russia 25-15 to keep their hopes of automatic qualification for RWC 2019 alive and, at the same time, end the Bears’ interest, while Georgia took another step towards lifting the Rugby Europe Championship trophy with victory over Spain in the latest round of matches.

Romania have moved three points clear at the top of the RWC 2019 qualification table after a hard-fought 25-15 win over Russia in freezing conditions in Cluj.

Here is the ranking for @rugbyworldcup European qualifiers after games played today in #REC2018 . Spain (@ferugby ) and @RugbyRomania are in the race for qualification. Still 2 rounds for the final ranking.
Details on https://t.co/duIKEh3AQN pic.twitter.com/QPZc2QJyme

Rivals Spain, however, remain in the driving seat to take the direct route to Japan as Europe 1, and join Ireland, Scotland, hosts Japan and the Play-Off winner in Pool, A, as they have one qualification match more to play than the Oaks.

Romania’s failure to secure a bonus point means that Los Leones now just need to win their remaining Rugby Europe Championship fixtures against Germany and Belgium, on 11 and 18 March respectively, without worrying about finishing three tries clear of their opponents.

Spain headed to Tbilisi for their top-of-the-table clash against Rugby Europe Championship leaders Georgia with a much-changed team from the one that famously beat Romania a fortnight ago.

Coach Santiago Santos opted to rest most of his frontline stars for the big RWC 2019 qualification battles ahead, but he will have been encouraged by the performance of some of his fringe players who made the Lelos work hard for a 23-10 victory.

Meanwhile, Germany’s woes continued in Brussels with a 69-15 defeat to fellow strugglers Belgium. It was the Black Devils’ third-highest score in test history and only the sixth time they had passed the half-century mark.

Records also tumbled in neighbouring Holland too, as the Netherlands emphatically beat Poland 71-30 in front of a 4,000-strong crowd in Amsterdam.

Openside Huey van Vliet scored a hat-trick as the Netherlands posted 11 tries, the most they have achieved in a single test, on their way to a record test score. Fly-half Liam McBride added four conversions in each half for a 16-point haul.

The Netherlands are now level with Portugal on 14 points but have played a game more than their promotion rivals, who still have designs on a place at RWC 2019 via the play-off route. 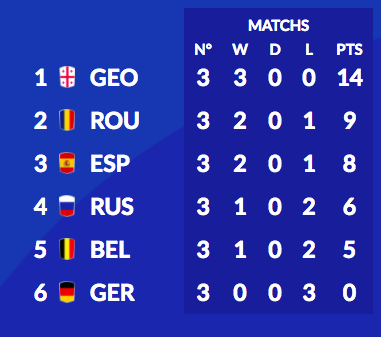