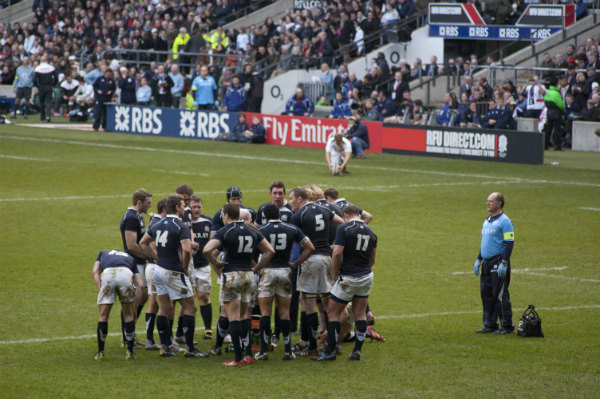 After stunning the sporting world on Saturday with their humbling victory over two-time world champions South Africa, Japan returns to action today when they take on Scotland.

Vern Cotter, the Scotland head coach, has admitted that the Japanese surprise victory has “made guys sit up and take notice’ ahead of their clash tomorrow at Kingsholm.

The Brave Blossoms caught the imagination of the Brighton crowd in their 34-32 victory against the Springboks, and will look to do the same in Gloucester against a Scottish side who are just kicking off their Rugby World Cup campaign.

Japan, who before the weekend had only one World Cup win ever to their name and that was 24 years ago against Zimbabwe, are now tantalisingly close to reaching their first ever World Cup quarter-final.

The Scots have won all four of the pair’s previous encounters, including World Cup pool matches in 1991 and 2003 and will be out to spoil the party as they also look to reach the final eight for the first time since 2007.

The Dark Blues, who picked up the wooden spoon at the Six Nations in the Spring, have somewhat renewed confidence after two wins against Italy and a narrow loss to France in their World Cup warm-ups.

New Zealand-born Cotter welcomes back star fullback Stuart Hogg from injury, bringing him straight back into his starting XV.

Cotter said: “We’ve prepared well for what will be a very tough Test against a powerful and fit Japanese team, who like to play a high-tempo game.

“They [Japan] will have taken a lot of confidence from their opening win over South Africa however that doesn’t change our approach to this game or the pool.

“The priority for us to ensure that we get our jobs right with accuracy, and impose ourselves on the game.”

Scrum-half Greig Laidlaw captains the side and will partner Finn Russell in halves, with Matt Scott and Mark Bennett combining in midfield. The Fullback is Hogg and the wingers are Sean Lamont, who is winning his 98th cap, and Tommy Seymour to complete the back line-up.

Alasdair Dickinson, Ross Ford and Willem Nel make up an all-Edinburgh front row while Grant Gilchrist joins Jonny Gray as the lock partnership, with Ryan Wilson, John Hardie and No 8 David Denton playing in the back-row.

Japan have certainly come a long way since they were thrashed 100-8 by Scotland in 2004, which is the Dark Blues’ largest ever Test victory.

But 11 years on a lot has changed and Eddie Jones, Japan’s head coach, is now  aiming to beat Scotland as he strives for his team to be more than “One hit wonders”

“We have two objectives: reach the quarter-finals and be team of the tournament,” said Jones.

“With that in mind we have made a successful start. We did not come here to be one-hit wonders.”

Jones has made six changes to his starting XV as his team have had just four days to prepare for Wednesday’s match.

Props Keita Inagaki and Hiroshi Yamashita come into the front row while bulldozing number 8 Amanaki Mafi, who came on as a replacement against South Africa, also gets a start.

The other three changes for the Cherry Blossoms has Justin Ives replace Hitoshi Ono in the second row while centre Yu Tamura and wing Kenki Fukuoka also come into the team.

It took the Glasgow fly-half little more than a year to break into the international team from club rugby, making his debut in 2014. With bags of potential and a clever rugby brain if the 23-year-old can find his feet early on he may be able to tear open Japan’s robust defence.

Of Tongan origin, Amanaki Mafi, despite only coming on as a replacement, was one of the stand-out performers in Japans World Cup opener against the Springboks. The number 8 looked comfortable with the ball in hand completing 12 carries while connecting with all his tackles in defence. The dynamic forward will be someone Vern Cotter’s men will need to keep an eye on.

RUCK prediction
Japan come into this game probably physically and emotionally exhausted after their epic battle with the Springboks this past weekend in Brighton. They have tremendous fighting spirit and great will to win but Scotland’s freshness and World Cup know-how will probably give them the edge in this one. However, after Saturday it would be ridiculous to write off the Cherry Blossoms.
Scotland by 6

WATCH: John Barclay continues his campaign to give Stuart Hogg a heart attack