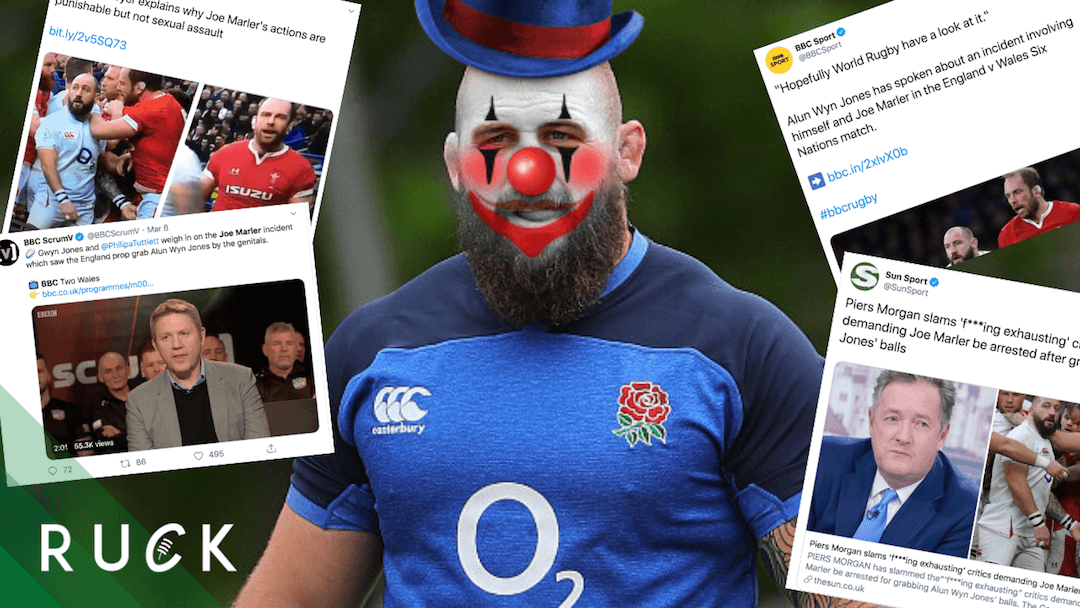 Steven Smith column: Joe Marler wouldn’t have been cited if not for media circus

BY STEVE SMITH – Editor-In-Chief of RUCK.co.uk

What a few days it’s been. Being positive, Joe Marler taking a grab of Alun Wyn Jones’ junk has finally given us a slight relief from endless overblown Coronavirus coverage.

The England prop was involved in perhaps the most bizarre moment of this year’s Six Nations tournament after he was spotted grabbing the penis of Wales captain Alun Wyn Jones.

If you’d asked me at first viewing, I’d have expected Marler to get a slap on the wrist and that be it.

However, following the widespread coverage of the incident that quickly developed into a media circus, which even featured on This Morning Britain with Piers Morgan, the citing commission didn’t have a choice.

There was a clear swing in the mood. What started off as a low-brow, amusing story blew up with people over analysing to the extent that the words ‘sexual assault’ were beginning to be thrown about. The reality is probably somewhere in the middle.

I guarantee you that Marler, who can sometimes get himself into difficult situations, got on with the game without giving the ‘coming together’ a second thought.

In a statement, the Six Nations organisers explained Marler’s act was ‘against the spirit of good sportsmanship’, but let’s not mess about, he’s been cited for bringing the game into dispute.

The incident has led to rugby being placed front and centre of the headlines for all the wrong reasons and that, in truth, is why Marler will be banned.

If we’re talking about behaviour on the pitch, I found Owen Farrell’s reaction to Wales winger George North spurning the chance to score far more unsporting.

All the talk of Marler seems to have overshadowed what started the whole thing off. Which was Owen Farrell saying hello to George North. pic.twitter.com/BsfWq7jKQM

This sort of conduct, which makes the England captain a player opposition fans love to hate, embarrassed me as an England supporter.

How long will the ban be for the Quins star? He’ll not get a reduced sentence as he has a lengthy rap sheet.

The shortest ban for “grabbing, twisting or squeezing the genitals” is 12 weeks, with a top-end level of 24 weeks or more, up to a maximum of 208. It should be at the low end but, either way, his season is over.

Where do I start when it comes to citing in international rugby?

Honestly, if this tackle from Courtney Lawes needs looking at by a panel of old farts we might as well not bother with rugby anymore.

It’s a poor tackle, there’s no getting away from that, but there are 10-20 of these throughout any game any given Saturday up and down the country. Another example from Twickenham would be Hadleigh Parkes’ ugly hit on centre Manu Tuilagi.

Which one makes more contact with the head? Answers on a postcard.

While it was a red for tuilagi I’m surprised the Parkes challenge wasn’t looked at pic.twitter.com/NWkgJlyyZH

TRY OF THE DAY

Okay, let’s talk about some rugby. This is a cracker.

As a Newcastle Falcons fan, this try will always be a personal favourite to me and my family.

Every time my Dad knocks back a Guinness or two, the story of how he was behind the posts with my Uncle Malcolm and late Uncle George to witness Dave Walder’s winning try in the 2001 Tetley’s Cup final never fails to put a smile on both our faces.

With 83 minutes on the clock and Quins hanging on grimly to a three-point lead, Newcastle prop Ian Peel appeared to have been ushered safely into touch.

Quins throw? Not according to touch judge Steve Lander, who awarded a Falcons lineout. This would be the one time my Dad didn’t complain about the match official.

The Falcons then created a last-gasp attack that led to full-back Walder slicing between to two defenders to score in the corner. A young Jonny Wilkinson converted and it was game over; leaving Quins complaining long and hard into the night and Newcastle heading back up the A1 in the snow with the silverware.