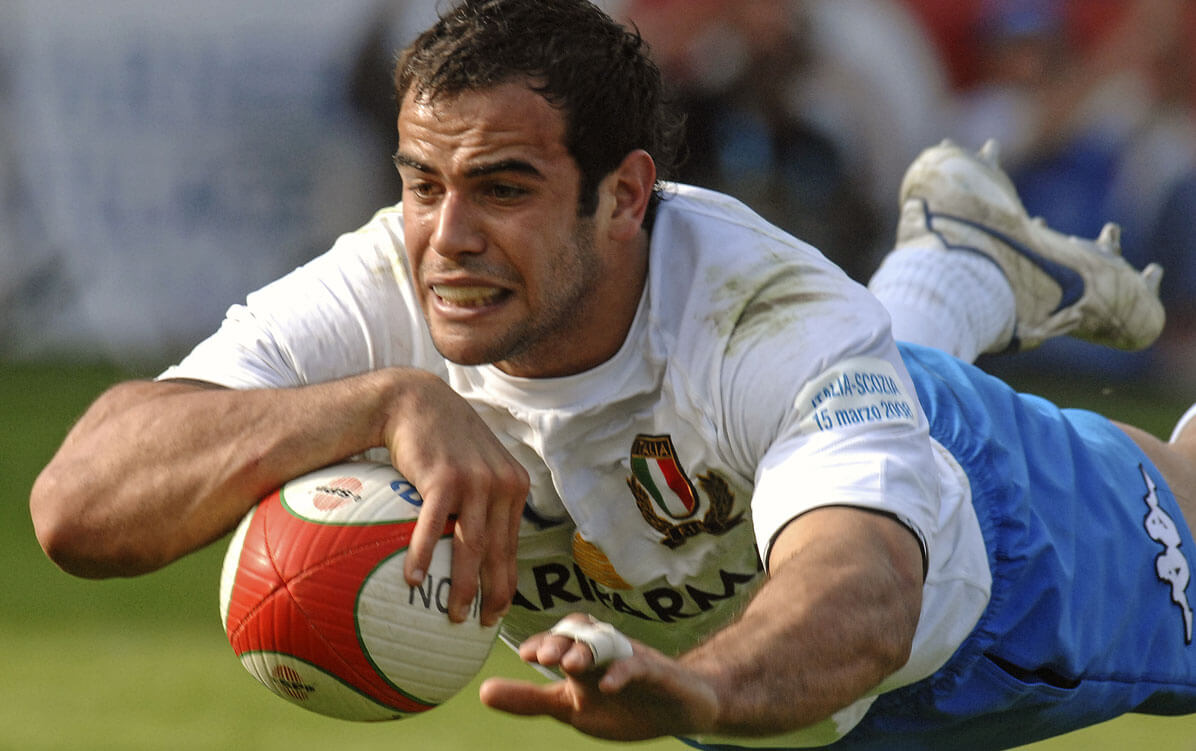 It’s almost here. The Rugby World Cup kicks off in just over a month so here at RUCK.co.uk we thought it would be a good idea to relive some of the most spectacular tries in the competition’s history.

New Zealand legend Jonah Lomu made the cut, alongside sensational France fullback Serge Franco and Stephen Jones, who was the only try-scorer selected from any of the home nations.

We start with a simply wonderful try that was started and almost finished by Wales’s engine, Shane Williams. The winger received a kick outside his own 22-metre area before darting past two players and sending scrum-half Dwayne Peel downfield. Two passes later Williams was back on the ball before playing a delightful inside pass to Stephen Jones who touched down to complete a sensational try. England may have gone on to win the game and later the World Cup but Welsh fans will forever remember this try as their moment of glory.

Did you know: Jones made his international debut for Wales in 1998 against South Africa.

New Zealand centre Nonu may have scored this try early in the semi-final win over Australia, but it was brilliantly set up by Israel Dagg. The blisteringly quick full-back received the ball around 30 metres out, threw a dummy before fending off Rocky Elsom and getting in a sublime offload as the touchline neared to leave Nonu with an easy finish.

Did you know: Nonu likes to surf and play cards in his free time.

This is one of the most memorable tries in World Cup history and was a particularly amazing moment for Fiji. It should have secured a better result for the Fijians, but two poor decisions from referee Paddy O’Brien meant France had a lucky escape. Fullback Uluinayau smashed the line with speed, breaking the initial tackle before a great inside step to beat the French defence as he sped across for the game’s opening try.

Did you know: He is now the Backs Coach for Fiji

This was possibly the best try of the 2007 World Cup as Zimbabwean born Ngwenya, who was the sensation of the American Eagles team, left South Africa supporters in pure shock. After receiving the ball, he stopped then decided to take on 2007 IRB Player of the year Bryan Habana on the outside, beating the Springbok speedster for pace to score in the corner. It was a moment that rugby fans across the world will savour for a long time.

Campese was at his best going into the 1991 World Cup and was the star of the show as the Wallabies dismantled New Zealand in the semi-final. He came off his wing to slot in at fly-half and after taking the ball at an amazing speed moved intelligently to score as the All Blacks never came close to catching the Aussie.

Did you know: Campese received an Australian Sports Medal in 2000, a Centenary Medal in 2001 and was made a Member of the Order of Australia in 2002.

This try is really special as it was the try that sealed the first World Cup title. A perfect one-two with Michael Jones from the base of the scrum allowed Kirk to dart in and score in the corner. It was well-worked move that paid off and ensured New Zealand were the first world champions, and it seemed fitting that the winning score was from their inspirational captain.

Did you know: Kirk along with John Kirwan were the only two players to refuse to join the rebel “Cavaliers” team to face South Africa on moral grounds as they felt that it would give comfort to the apartheid regime.

Blanco was one of the best attacking fullbacks the world had ever seen and he is always remembered for his try that broke Australian hearts in the semi-final of the inaugural World Cup. The game was tied 24-24 with time running out before the phenomenal fullback dived over to score an injury time winning try in the corner. Afterwards he collapsed in the Australian in-goal area, overcome with emotion, having sealed Les Bleus’ place in the final.

Did you know: Blanco famously smoked 60 cigarettes a day throughout his career.

Explosive winger Rupeni Caucau, who was the master of amazing tries, scored one of his finest at the 2003 World Cup against France. The flying Fijian had pace like no one had ever seen before and used it to full effect against Les Bleus, carrying the ball from just outside his own 22 down the left wing before touching down between the posts with the France team still in the Fijian half wondering what had just happened.

Did you know: He has also been the honourable chairman of Hong Kong Touch Rugby Team Rupeni RFU since 2002.

Many consider this try to be the best individual score ever touched down but for us it was just the runner-up. All Blacks Captain Kirwan was at the peak of his talents heading into the tournament and showed his awesome ability as he shot past the entire Italian defence from his own 22 to run the length of the field to score an unbelievable try.

Did you know: Kirwan has openly spoken of his battle with depression and is actively involved in mental health and depression awareness campaigns in New Zealand.

There could only be one top moment and it had to be when Lomu bulldozed over in Cape Town in the semi-final against England to confirm his status as the All Black’s first superstar. Lomu received the ball from a bad pass but was able to fend off Rory Underwood before powering past Will Carling and finally over the unfortunate Michael Catt. It was the most memorable moment from the 1995 World Cup.

Did you know: Lomu is today a member of the ‘Champions for Peace’ club, a group of 54 famous elite athletes committed to serving peace in the world through sport.