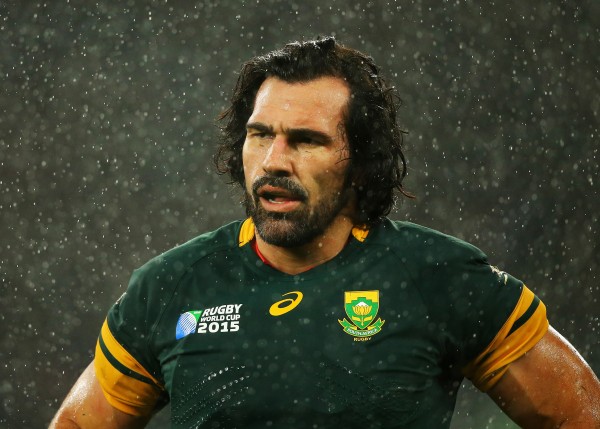 Top 10 Locks of All Time

With Springbok great Victor Matfield playing his final game for South Africa tomorrow, we count down our top 10 locks of all-time.

The second rows are considered the engine of rugby scrums and is a position traditionally made up of the toughest, most powerful men each country has to offer.

After much deliberation here are RUCK’s final selection – do you agree?

A buoyant larger-than-life figure, Brown was an abrasive steamroller of a lock. Brown combined with Willie-John McBride to form a famous partnership in the second row for the British and Irish Lions during the 1971 and 1974 tours while also played 30 Tests for Scotland. When he died of cancer in 2001 aged just 53, the rugby world mourned the loss of one of its great characters.

Did you know: Brown was from a sporting family, his elder brother Peter also played for and captained the Scotland national side.

Standing 6ft 6in and weighing over 18 stone, powerhouse Wyn Jones has been the central pillar of all the success Wales have had since the lock made his Test debut in 2006. Wyn Jones, who has won 96 Test Caps for the men in red to date, played an integral part when Wales won Six Nation Grand Slams in 2008 and 2012. The second-row has also been a regular player for the British and Irish Lions during their last two tours in 2009 and 2013 and he even Captained the side on one occasion after Wales team-mate Sam Warburton was ruled out.

Did you know: Jones studied part-time for a degree in law at Swansea University, graduating on 21 July 2010

A rugged and physical presence, Thorn holds the distinction of having represented Australia in rugby league and New Zealand in rugby union. The all-action lock made his New Zealand bow against Wales in 2003 and would go on to gain selection for the 2003 Rugby World Cup before eight years later being part of the 2011 Rugby World Cup-winning All Blacks, which was the first time the Kiwi’s had hoisted the Webb Ellis Cup since 1987.

Did you know: His status as a dual-code international saw him join Bill Hardcastle in the record books as only the second man to have represented Australia in league and New Zealand in union

Inspirational former Lions and Ireland captain Willie John McBride played 63 times for the Irish during a 13-year international career between 1962 and 1975. Nevertheless, many rugby fans will always remember him more for his long association and amazing achievements with the British Lions, who he toured with five times, winning Test 17 caps. However, the pack leader also tasted success in the emerald green of Ireland, notably in their first win against the Springboks in 1965 and when Ireland beat Australia in Sydney, which was the first time a northern hemisphere nation had defeated a southern hemisphere team on their own patch.

Did you know: In 2004 McBride was named Heineken Rugby Personality of the Century by Rugby World magazine

Since making his international bow in 2002, Sharpe went on to not only Skipper the Wallabies but also become one of their most consistently excellent players since the millennium. The lock forward zoomed past the 50-cap mark during 2006 with a remarkable sequence of Test appearances, as when he was rested for the Test against Fiji in Perth in June 2007 it ended a run of 28 consecutive Test matches for the Wallabies. Sharpe’s outstanding work ethic across the field was also recognised as he won the Australian Rugby Union Players’ Association’s ‘Medal of Excellence’ on three occasions, joining George Gregan as a three-time winner of the honour.

Did you know: His final match playing for Australia was a win against Wales at Millennium Stadium on 1 December 2012

One of the legends of a golden era of amateur rugby, powerful lock Meads’ international career with New Zealand spanned an impressive 14 years between 1957 and 1971. During that time, he won 55 caps and played a major part in series wins over all the major Test nations, as well as the British Lions. Meads has received a number of honours for his contribution to the game, which includes being inducted into the International Hall of Fame and the New Zealand Sporting Hall of Fame. He was then in 1999 voted the Player of the Century at an NZRU awards dinner.

Did you know: Despite his fame and iconic status in New Zealand, Meads remains a humble sheep farmer who is typified by a bygone era in New Zealand and rugby

Talismanic Ireland and British Lions Skipper Paul O’Connell has been one of the most consistent players in Northern Hemisphere rugby in the last ten years. The veteran warrior has won in the emerald green of Ireland three Six Nations titles including a Grand Slam triumph in 2009 as well as winning the four Triple Crowns in 2004, 2006, 2007 and 2009. The lock retired from international rugby following Ireland’s elimination from the 2015 World Cup and is now preparing for life across the channel in France playing for big spenders Toulon.

South Africa’s Matfield defined the attributes required to be a world-class modern-day second row: tall, powerful, mobile and with great hands. During his 126 Test caps with the Springboks, he formed a formidable second-row partnership with Bakkies Botha, which played a crucial role in South Africa claiming the 2007 World Cup in France. Besides almost always winning his own line-out ball, Matfield is known for his exceptional skill at disrupting opposition line-outs, which was a critical asset to the Springboks during their triumph eight years ago.

Did you know: In 2008 he became the first international captain to beat the All Blacks in New Zealand since Martin Johnson in 2003

Iconic England legend Martin Johnson is widely regarded as one of the greatest locks and captains to have ever played the game. He famously led England to glory at the 2003 Rugby World Cup and also skippered the British & Irish Lions in 1997 and 2001. He is also the only player to have ever led the elite tourists twice, winning three of his six tests as Skipper. In a glittering career, Johnson also was a part of two Grand Slam-winning England sides in 1995 and again in 2003.

Did you know: Johnson was awarded an OBE by The Queen in 1997 but later honoured with a CBE in the aftermath of England’s Rugby World Cup triumph in 2003

Perfect is a hard word to describe someone as but John Eales was not far off and that is why we have ranked him at no.1. He had practically every skill the modern-day rugby player requires and was a born match winner. A true Australian sporting legend, Eales won two World Cups in 1991 and 1999 and played 86 times for his country, 55 times as captain. Rarely for a forward he was also a goal-kicker, with his most memorable strike being a sideline penalty goal in the final minutes of a Test to win the Bledisloe Cup against New Zealand in 2000.

Did you know: He also played first-grade cricket for Queensland University in the Brisbane QCA cricket competition

RANK: The 20 most inspirational rugby Captains

15 Reasons why Ireland MUST host the 2023 Rugby World Cup