Bottom side Agen caused the biggest shock of the Top 14 season so far on Saturday, the recently-promoted hosts overcoming reigning champions Stade Francais 28-23 at Stade Armandie for just their second win of the campaign.

Agen, who finished fourth in Pro2 last year and only achieved promotion via the play-offs, came into the game as firm underdogs at home to French rugby’s top side last season, having lost their last three games, but they were in impressive form from the off this weekend.

Undaunted by their task, Burton Francis kicked two penalty goals inside the opening quarter to put the hosts six points up before a Jules Plisson penalty halved the deficit ahead of Paul Williams’ score, which was improved by Plisson, put the visitors 10-3 up.

But the plucky Blue and Whites hit back before half-time to put themselves 13-10 up at the interval after Francis converted a Mathieu Lamoulie try on 38 minutes.

And they rumbled further ahead after the break with another Francis penalty before Antoine Erbani brought a wave of belief amongst the partisan crowd, scoring his side’s second try on 54 minutes to put the division’s still bottom team 11 points up.

Johann Sadie was next to go in for the home team, who were threatening to run riot after Francis put them 18 ahead. But a late fightback followed from the champions with Plisson converting a penalty try between two penalty goals, but the buoyant hosts held on to pull themselves to within a point of safety and the 12th-placed All Pinks, who suddenly have a very real crisis on their hands.

Elsewhere, in the division’s Marquee Game, Montpellier lost ground on top spot after a 33-25 home loss to Toulouse, who moved above them into third after the weekend’s action.

Former England man Toby Flood and France’s Gaël Fickou got the away tries in the opening quarter, both converted by Sébastien Bézy, who hit three penalty goals in the first period, with Nic White’s try converted by Ben Lucas, who also added two first-half penalties, keeping the hosts in touch.

But Toulouse closed out the game in the second half, despite a spirited fightback from the 2011 Top 14 runners up as Paul Perez’s converted score alongside another Bezy penalty handed the visitors a decisive advantage, meaning Akapusi Qera’s second-half double plus one conversion from Lucas, wasn’t enough to avoid defeat.

Further down the table, Baptiste Serin kicked all his side’s points as improving Bordeaux-Begles beat La Rochelle 21-16 at Stade Chaban-Delmas.

In an attritional clash, it was Serin who stole the show, kicking seven goals, including four in the second half, to cancel out Kini Murimurivalu’s converted try on the hour on top of three penalties either side of half-time from Zack Holmes. 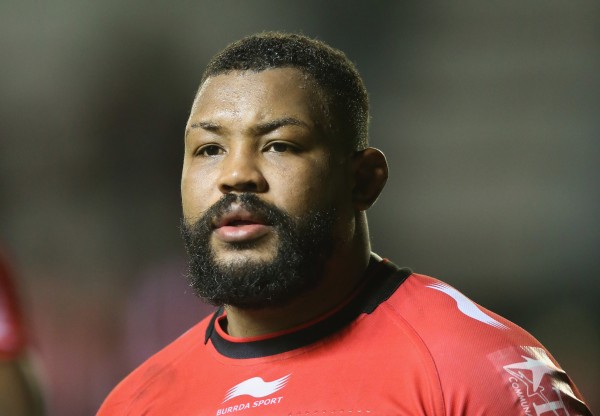 In another mid-table tie, Steffon Armitage earned the crown of the Top 14’s unluckiest player this weekend as the flanker’s hat-trick wasn’t enough to avoid a 33-29 defeat to Grenoble in Sunday’s only fixture.

Toulon actually outscored their hosts four tries to three with Georgia’s Mamuka Gorgodze adding to the Englishman’s treble, all converted by Jonathan Pélissié, who also kicked a penalty, but Jonathan Wisniewski’s 18-point haul helped see the hosts over the line, the fly-half converting scores from Gio Aplon and Stephen Setephano plus a penalty try, before decisively kicking four second-half penalties.

In Auvergne, Clermont stormed to the top of the table with a 42-11 thrashing of Castres.

Albert VuliVuli and Nick Abendanon got first-half tries as the hosts went 20-6 up at the break thanks to a pair of conversions and penalties from Camille Lopez in response to two penalty goals from Geoffrey Palis.

But an even better second half was to follow as Palis’ try on the hour was the only defensive blemish, with 22 further points scored through hooker Benjamin Kayser, David Strettle and Lopez, who improved twice to add extra gloss to a convincing scoreline.

The relegation battle also took another twist this weekend with Oyonnax picking up their first win since August, downing fellow strugglers Pau 42-23 at the Charles-Mathon Stadium.

After suffering a 61-3 mauling at Toulon last week, Oyo flew out of the traps with Piri Weepu going over inside a minute, before Florian Denos and Daniel Ikpefan also scored before the half-time whistle, Welshman Nicky Robinson adding three conversions and a penalty to leave the visitors stunned at 24-6 down despite two Samuel Marques penalties.

Something of a fightback came from the away dressing room in the second period as Marques and Thibault Daubagna converted tries from Brandon Fajardo and Mosese Ratuvou, plus a further penalty from Marques, but Alaska Taufa and Jérémie Maurouard got tries to rack up an unassailable lead, Regis Lespinas converting once alongside an early drop and penalty goal from Robinson.

Finally, second-placed Racing produced a stirring second-half comeback to pick up their sixth win of the season, overcoming Brive 17-14 at Colombes.

Mid-table Brive went travelled to Paris as firm underdogs, but an outstanding first-half performance saw them race into a 14-0 lead thanks to a try from Sevanaia Galala and three penalties from in-form Gaëtan Germain.

But the hosts were handed a lifeline on the stroke of half-time as Maxime Machenaud kicked a penalty goal on 39 minutes.