Tributes have poured in from around the world following the news of All Blacks legend Jonah Lomu’s untimely death.

The blockbusting winger hung up his boots in 2009 after enjoying a stellar career despite a long battle with kidney problems.

The 40 year old attended the World Cup final which saw his home nation become the first national side ever to retain the title and tweeted as recently as Monday, but passed away in Auckland last night.

Tributes have come from all corners of the globe, Toulouse prop and former All Black Neemia Tialata perhaps summed it up best and remarked at how far and wide Lomu is remembered.

Wow😳 shows how big @JONAHTALILOMU was around the world with all the LOVE going out to him. @ochocinco 👌🏽✌🏽️#RIPjonah https://t.co/WBk4KfNrKQ

The barnstorming Auckland-born star was even remembered at a local council in west Ireland.

New Zealand Rugby Chief Executive Steve Tew led the tributes as the news broke last night, saying : “We’re all shocked and deeply saddened at the sudden death of Jonah. We’re lost for words and our heartfelt sympathies go out to Jonah’s family. Jonah was a legend of our game and loved by his many fans both here and around the world.” The social media world has predictably been glowing with memories and tributes today, as Hurricaines and current All Black TJ Perenara said:

Since I was a little boy all I wanted to do was be like you.!! Thanks for the memories big man #RIPLomu pic.twitter.com/u6Jm267LI1 — Tj Perenara (@Tj_Perenara) November 18, 2015

And Danny Care of Harlequins, who faced Lomu for the Cardiff Blues during his days at Leeds Tykes, paid a fitting tribute on Instagram:

Danny Cipriani, the Sale and England fly half also told Sky Sports he ‘would never have played the game’ without Lomu’s influence during his younger years.

One of the most emotional tributes came from students at Lomu’s former school, Wesley College, who bode farewell to the All Blacks legend by performing a mass haka –

But the most personal tribute came from his wife, Nadene Lomu, who paid an emotional tribute to her late husband. 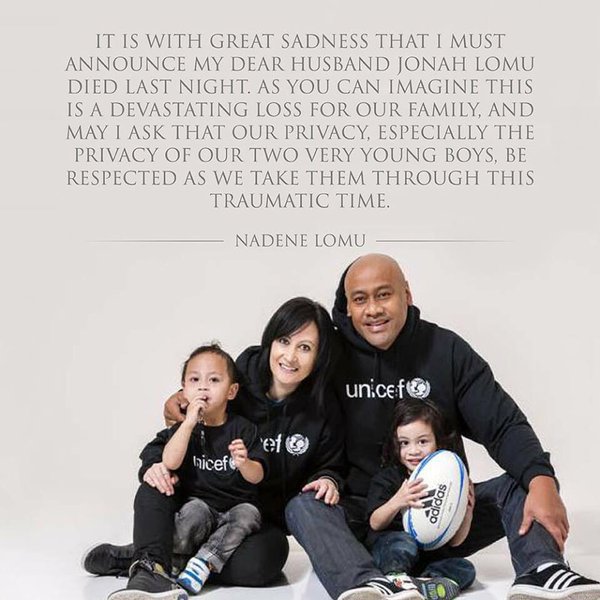