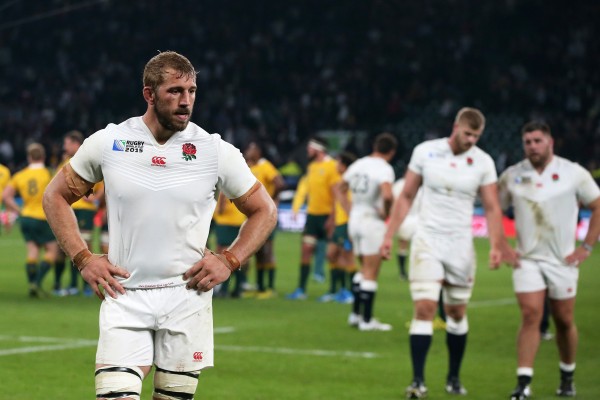 “We let the whole nation down,” says Robshaw

“We let the whole nation down,” that was captain Chris Robshaw’s damning assessment of England’s early exit from the Rugby World Cup.
After an underwhelming start to the campaign, nothing other than a win over Australia last night would have kept the home nation’s hopes of silverware alive.
However, Robshaw and his team-mates were outplayed by the dominant Aussies, eventually slipping to a 33-13 defeat, sending the host nation out of the World Cup at the group stage for the first time in history.
“We feel we let the country down today. We apologise to them,” a dejected Robshaw mused.
“They put us under a lot of pressure. We had a spell in the second half where we built a bit of a momentum, but to come back from a 17-3 half-time deficit against a quality side like that was always going to be difficult.
“A lot of hard work has gone into it but, for whatever reason, we haven’t got the results we wanted.”
After a less than convincing 35-11 win over Fiji in round one was followed by a gut-wrenching 25-28 reverse at the hands of Wales, England rarely threatened to take the spoils as they fell to their heaviest-ever home defeat to Australia.
The Wallabies number 10 Bernard Foley starred with a record-breaking 28-point haul to put Stuart Lancaster’s men to the sword, but Robshaw said: “I thought we played very well in parts, even when we were 17 points down.
“But they were strong in all areas with some very experienced players. We never gave up and, at 13-20 with 15 minutes to go, I thought we had a chance, but it wasn’t to be.
“I hope the fact we will not be in the quarter-finals does not undo all the work we have done with the England fans,” he added, when quizzed on the future of English rugby.
“We have a group of young players who are fantastic role models for their country, and they will go on to become great players and I do not think our absence will prevent this tournament from being successful. There will be a lot of good rugby to watch.
“We still have a job to do this week preparing for Uruguay, and, after that, decisions will be made about the future. But it is not up to me.”
Share

" says Robshaw, "We let the whole nation down, Chris Robshaw, england, England 13-33 Australia, rugby world cup
You may also like