Ireland are up to second place in the World Rugby Rankings for the first time since August 2015 following their 20-point win over Scotland and England’s narrow loss to France in Paris.

The two results combined not only saw Ireland claim the NatWest 6 Nations title with a round to spare but also brought about a swing of 2.52 rating points in their favour. 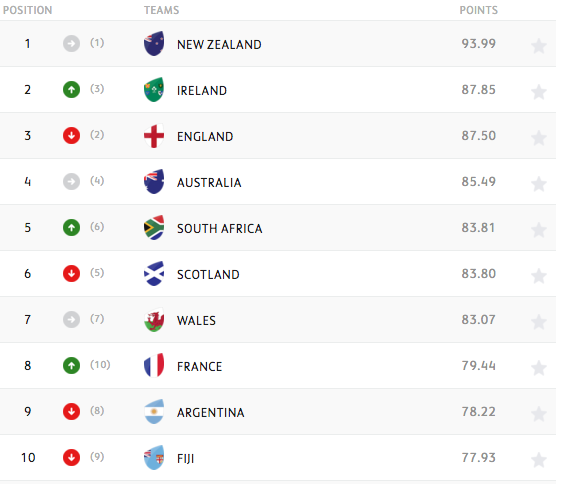 Jacob Stockdale was the Irish hero once again as the Ulster winger’s first-half brace helped them on their way to a 28-8 win in Dublin. In dotting down twice for the third match in a row, Stockdale became only the second player in the 137-year history of the Championship to score multiple tries in three consecutive games and the first to do since England’s Cyril Lowe in 1914.

Ireland are now on 87.85 points – over six behind the world’s number one team New Zealand, and 0.35 in front of England, who they face at Twickenham on Saturday as they go in pursuit of only their third Grand Slam.

Scotland’s defeat at the Aviva Stadium saw them drop to sixth below South Africa in the rankings, while France are up two places to eighth as their 22-16 victory over ill-disciplined England saw them gain 1.89 points, which was enough for them to leapfrog Argentina and Fiji.

While the three matches in the Rugby Europe Championship had little impact on the rankings, wins for Portugal and the Czech Republic in the second-tier Rugby Europe Trophy resulted in them improving their respective positions.

Defending Trophy champions and current competition leaders Portugal move above Namibia into 23rd after a 29-10 win away to a Moldovan side on the slide. Moldova’s eighth consecutive defeat sees them drop a place to 46th with Malaysia the side to profit.

Meanwhile, the Czech Republic beat Switzerland 17-13 to trade places with their opponents and move up to 31st with the Swiss dropping to 33rd.