BBC rugby bosses have had to correct an unfortunate subtitling error after the words ‘Nigel Owens is a gay’ was brandished across TV screens during their high-profile England versus Scotland coverage at the weekend.

Viewers at home picked up on the error which appeared after 65 minutes when the world’s number one referee yellow carded England flanker Sam Underhill at Murrayfield.

The subtitle explanation of the decision, captured in the screen-shot, read: ‘Yellow card. Nigel Owens is a gay penalty and yellow card.’

They quickly corrected it to read: ‘ Nigel Owens is saying penalty and yellow card’. 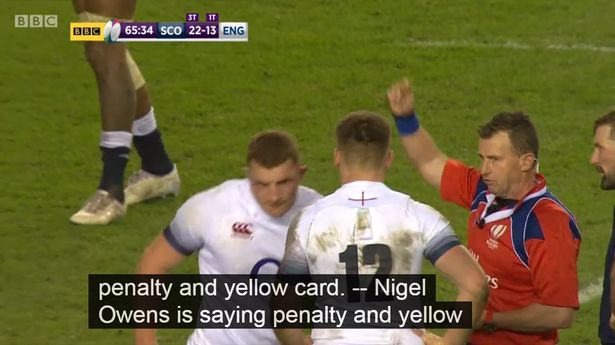 A BBC Spokesperson said: “Our live subtitling service produces accuracy levels in excess of 98% but, as with all broadcasters, there are instances – particularly during live broadcasts – when mistakes happen.

“On this occasion the voice recognition subtitling software made an error which was spotted and corrected immediately.”