Scotland kept their Six Nations title hopes alive with a stunning 29-13 win against Wales – but the victory also saw them move up to a highest ever world ranking.

The record-breaking new position, which will be announced by World Rugby next week, will see the men in blue move up to a record breaking 5th – beating their highest ever former position of 6th in 2010.

Prior to yesterday the Scots were in 8th, but thanks to beating higher placed Wales, they will leapfrog Rob Howley’s men. 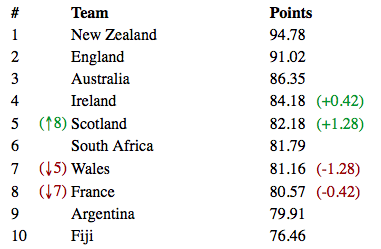 LIST: 5 rugby players you didn’t know played for these countries