As the Autumn Internationals get into full swing, an ill-fortuned group of key players must come to terms with the prospect of watching their team-mates from the sidelines.

From England’s Billy Vunipola brothers to France’s Camille Lopez and Wesley Fofana, with each country suffering from their own share of injuries and absentees.

In light of this, here we propose our own Autumn Internationals ’ ‘absent XV’:

Folau, who has chalked up 62 Tests since his debut in 2013, has decided to take a hiatus. The 28-year-old will miss the Wallabies entire end of season tour to Japan and Europe in a bid to freshen up his body for the 2018 and 2019 seasons leading into the World Cup.
Embed from Getty Images

Exeter Chiefs winger Jack Nowell misses England’s autumn internationals after fracturing his cheekbone against Newcastle Falcons. The 24-year-old underwent surgery shortly after suffering the fracture, but a bleed was discovered under the metal plate inserted under his eye, meaning a second operation was required. Director of rugby Rob Baxter has been reluctant to set a return date.
Embed from Getty Images

The Wales centre is set to be sidelined for around six months after suffering a foot injury in their Autumn opener against the Wallabies. The Welsh Rugby Union (WRU) said “it is envisaged that recovery will be in the region of six months,” while also confirming that 65 times-capped Davies requires surgery.

The talented centre hasn’t played for France this year due to a number of injury problems and will miss the Autumn Internationals.
Embed from Getty Images

The speedster will miss Wales’ entire autumn series after sustaining a knee injury in Northampton’s Champions Cup defeat by Saracens on October 17th. The injury will keep him out for a minimum of six weeks. 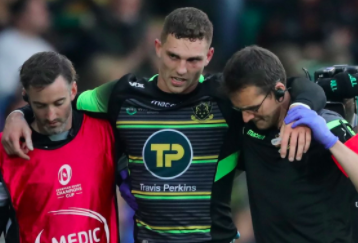