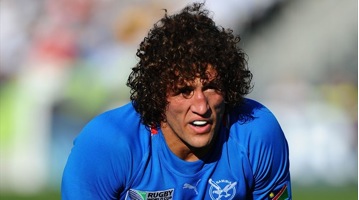 Burger, a key player for Sarries, made his international debut in 2004, winning 30 caps to date and will be playing in his third World Cup after playing in both 2007 and 2011.

Three other players in, prop Johnnie Redelinghuys, back-row Tinus du Plessis and scrum-half Eugene Jantjiesare are also preparing to be a part of a third World Cup campaign.

Redelinghuys is Namibia’s highest capped player of all-time with 46 Test caps to his name.

Namibia has had a tough World Cup history, losing all 15 of their contests at finals, conceding over 1000 points. And things get no simpler this year as they take on the world champions New Zealand, as well as Argentina, Tonga and Georgia.

However, Davies is hoping a squad that has combined both youth and experience could at last help them establish themselves on the international stage.

The former Wales international said: “There’s a lot of things you have to consider when making a selection like this, the dynamic of the group is very important, and I think we have a number of young, but inexperienced players whose exuberance is rubbing off on the more experienced players.

“I think it is the strongest group of players who we could have picked to select Namibia at the Rugby World Cup. There’s some good versatility and a big number of players are in good form as we showed recently when we won four test matches and moved up to No20 on the world rankings.”

But Davies did reveal he and the group knew the size of the challenge ahead of them. However, he ensured that the spirit within his squad is high.

“I feel the players that have put their hand up have been rewarded with selection. There’s a lot of courage and character, and we will be doing everything to get that first ever win at a World Cup,” the Welshman said.

“I am pleased with the dynamics of the players who are based in Namibia and those who play professionally. We couldn’t ask for a group that is more together, a more committed group.”

Namibia faces the All Blacks in their opening pool clash on 24th September at the Olympic Stadium before taking on Georgia, Tonga and Argentina in their remaining three fixtures.