The Aviva Premiership 2017/18 exploded into life last weekend and it’s back tonight with Sale v Newcastle kicking off a host of top flight action.

We’ve avoided Northampton v Leicester due to the unpredictability of local derbies.

Here’s our accumulator for the weekend:

Sale claimed five touchdowns at the Ricoh Arena, securing themselves a bonus point, but they were undone by a Wasps side inspired through scrum-half Dan Robson’s four-try contribution.

Dean Richards Falcons were clinical during their 35-8 bonus-point success against Worcester, but are still without Toby Flood (hamstring), who is expected to be out for another week or two.

With only two points separating the sides when the Sharks held off a late fightback to win 26-24 last season, going for the North East side +5.5 handicap at 10/11 seems like a logical bet.

Whatever happens, the game will be close, meaning giving the Geordies a slight head start may be the ideal way to kick off this weekends accumulator.

Todd Blackadder’s black, blue and whites got their season off to a flier by picking up an unexpected win away at Leicester.

This fixture last season, of course, was narrowly won by Bath 14-11.

Saracens have lost their two most recent away games, at Wasps in round 22 and at Exeter in the semi-final, but have not lost three in a row on their travels in the Premiership Rugby since March 2010.

The hosts have only lost once at the Recreation Ground in any competition in 2017, which was 3-24 to Wasps in round 17 of Aviva Premiership Rugby in March.

Whichever way you look at it, it will be tough to resist having some kind of a flutter on Bath somewhere across the Leovegas markets, and 11/8 is a very attractive price.

This fixture, I imagine, is the one that leaps out the most from the games this weekend if you’re neutral. There is intrigue absolutely everywhere.

It is Harlequin’s first game back on home soil after last weekend’s unexpected loss to London Irish at Twickenham.

Meanwhile, Gloucester Rugby began Johan Ackermann’s reign in the best possible way with a victory over reigning champions Exeter at Kingsholm on Friday. They have not begun a season with a pair of Premiership Rugby victories since 2007/08.

They have not begun a season with a pair of Premiership Rugby victories since 2007/08, but off the back of last weekend, 31/20 is an amazing price and will bump up your accumulater to give you the chance of winning decent money. 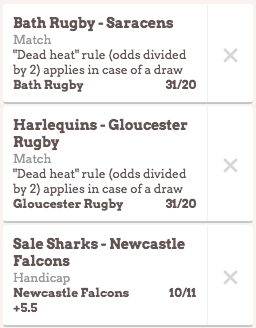 We’re competing in the LeoVegas Punters’ Union rugby betting league! We’re going head-to-head with other UK rugby sites this season to see who can win the most rugby bets! Who are you backing this weekend? Bet at leovegas.com

Another week, another Leicester Tigers departure