Brian O'Driscoll may have just had his FUNNIEST interaction with a fan yet... - Ruck
Skip to content
Rugby News

Ireland legend Brian O’Driscoll is one of the most popular rugby figures on social media, but he may have received his most bizarre comment yet yesterday.

The fan revealed to O’Driscoll that he “was in Australia in 2003 and pretended to be you – BOD – to an Aussie girl. 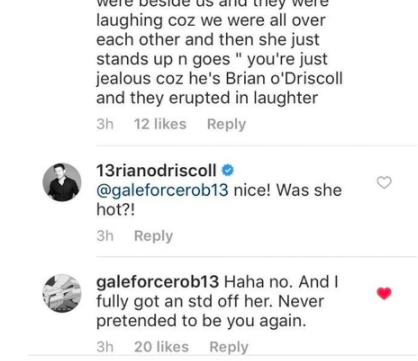 “We were kissing in a bar and this table of Irish lads were beside us and were laughing because we were all over each other.

“Then she just stands up and turned to them and went: ‘you’re just jealous because he’s Brian O’Driscoll’ and they all erupted in laughter.”

As expected, BOD took it like a champ and asked the question we were all thinking.

The guys reply was a little less what we expected:

“Haha no. And I fully got an STD from her. Never pretended to be you again/