RUCK picks our star performers from the first round of the European Champions Cup.

Team of the Round: Wasps take top honours this week as they finally clicked into gear by kicking off their European Champions Cup with a dominant, record-breaking 33-6 away victory against Leinster.

Player of the Round: England fly-half Owen Farrell successfully transferred his domestic form onto the European stage, guiding his side around the pitch to help Sarries down French big guns Toulouse with a masterful performance, finishing an impressive hour’s work with 17 points after being withdrawn for a well-earned rest for the final 20 minutes.

Play of the Round: Although Exeter Chiefs lost out against Ospreys, they still treated us to out favourite score of the weekend. Wing man James Short displayed an impressive mix of pace, agility and composure to steam in down the left edge for his third try in 11 European games. 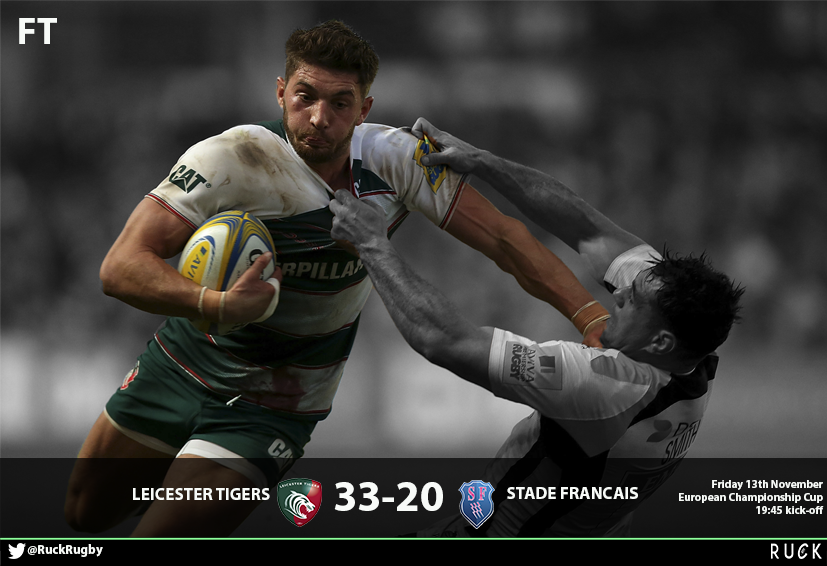 Leicester Tigers got their Champions’ Cup campaign off to the perfect start with a hard-fought bonus-point win over French champions Stade Francais at Welford Road.

After a slow start, it was Stade substitute Julien Tomas who broke the deadlock on 16 minutes, Morne Steyn hitting a penalty shortly after.

But Leicester crashed ahead courtesy of three unanswered tries, Niki Goneva scoring before supplying Matt Smith, who finished well, then Brendon O’Connor got over just after the interval. Owen Williams then added a conversion and a penalty goal to leave the hosts 20-8 up.

But Stade hit back on 52 minutes as Paul Williams stole in before Ben Youngs’ try, converted by Owen Williams, restored Tigers’ advantage ahead of Williams’ second penalty of the night. That meant a somewhat controversial Julien Arias try late on proved to be a consolation as Seremaia Bai rounded off the scoring with a penalty on the hooter. 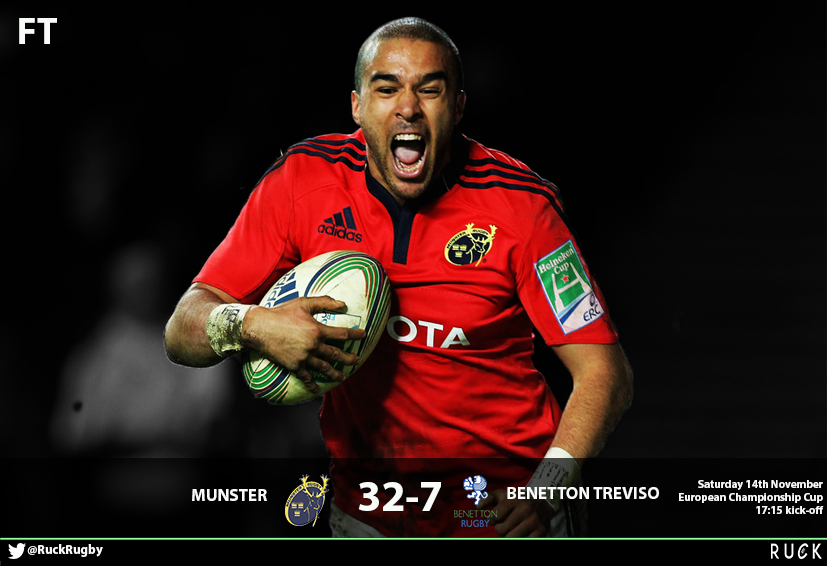 A late try by Man of the Match Simon Zebo earned Munster a bonus point as they beat Treviso 32-7 in their opening Champions’ Cup game in Limerick.

BJ Botha rumbled over on four minutes for Munster with fellow South African Braam Steyn replying with a superb solo effort for the visitors.

Treviso, predicted by many to be near no-hopers in the competition, produced some resolute defence but they were eventually worn down after the break as captain CJ Stander got Munster’s second try of the day.

Substitute hooker Duncan Casey and Zebo then added the further two tries to make sure of the win which puts Munster joint top with in Pool Four on five points. 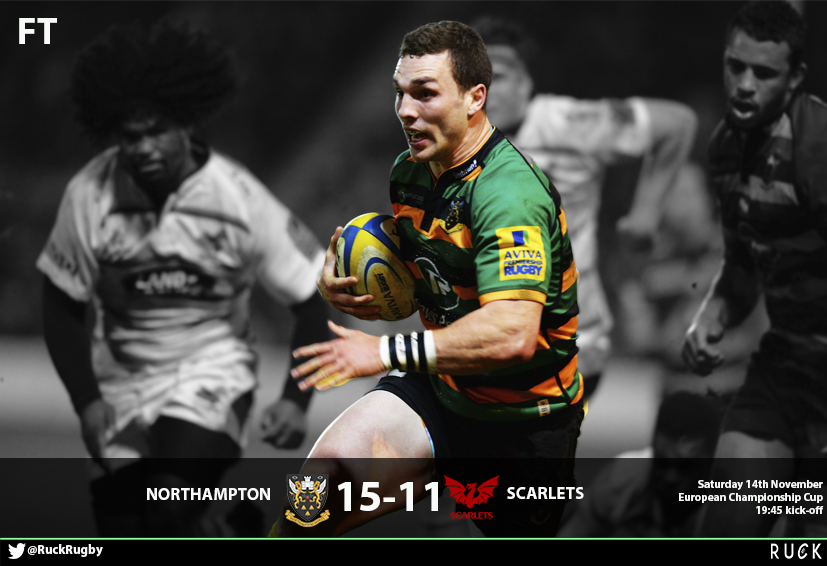 Northampton Saints secured a tense win at home against Scarlets as the visitors came away with a losing bonus point in their opening fixture of the Champions’ Cup.

Gareth Davies then crossed to give the Welsh outfit a slim advantage after the break, but Alex Waller went over and JJ Hanrahan added a penalty to hand the victory to Northampton – who put in a steely survival act with 14 men for a full quarter of the game.

And the away side were eventually left to rue be left to rue four missed kicks at goal which cost them valuable points, and ultimately the win, in a tough away day. 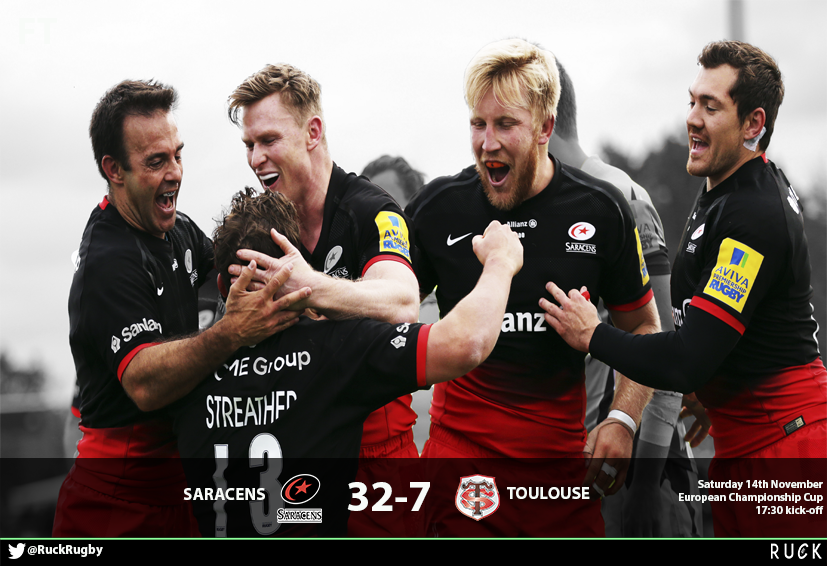 England’s Owen Farrell starred for the reigning Premiership champions, landing six goals in a dominant first half for the home side.

Mako Vunipola crossed for the first try of the game before USA international Chris Wyles added two more for Sarries, while Toulouse earned a second-half consolation through Christopher Tolofua.

France captain Thierry Dusautoir led out Toulouse at Allianz Park, and his players were clearly moved by the minute’s silence and rendition of the French national anthem before the game, in the wake of the suspected terrorism tragedy in Paris on Friday night. 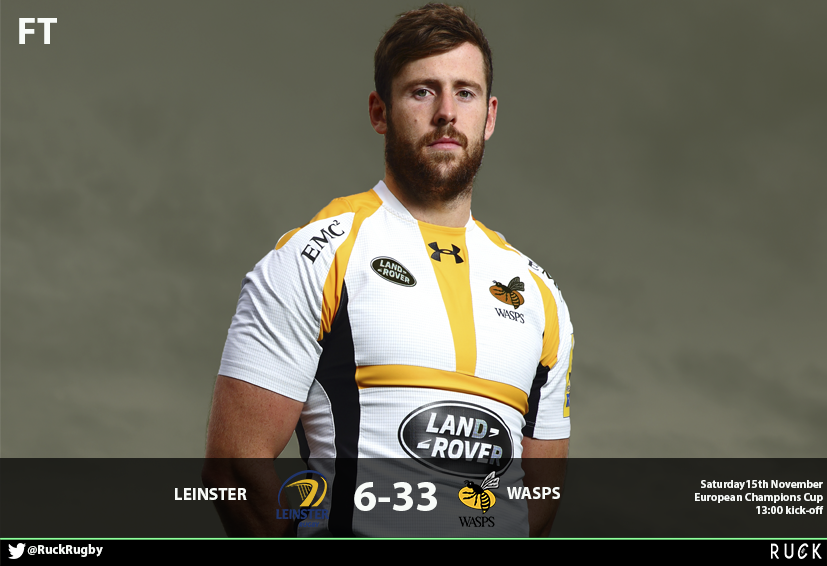 Wasps cruised to an unexpectedly comfortable victory as they inflicted the largest margin of defeat Leinster has ever suffered at home in the Champions Cup.

The visitors outscored the hosts three tries to nil with their exciting backs and solid defence proving too much for the Irish province to handle. However, things get no easier for the Coventry-based side as they face the reigning champions Toulon at the Ricoh next weekend.

The defeat represents the Irish provinces largest home loss in European competition, which leaves the three-time European champions in an awkward position in the pool with Bath coming up next. 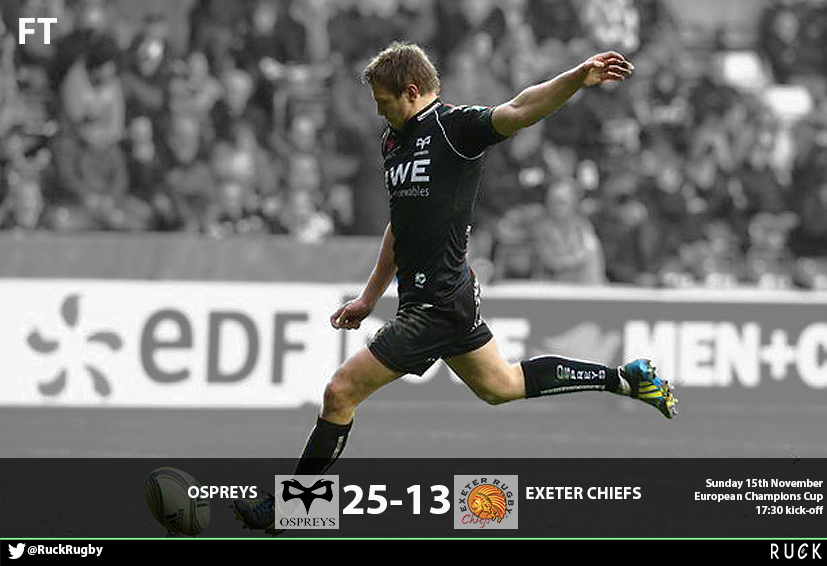 Dan Biggar kicked 20 points as Ospreys coasted past Exeter Chiefs for an opening-round Champions’ Cup win at the Liberty Stadium.

Biggar fired a warning of things to come with two early penalties, but Gareth Steenson hit back with a three-pointer of his own before James Short scorched his way over for the game’s first try on 32 minutes. Steenson converted for a 10-6 interval lead in favour of the Chiefs.

The hosts came out an improved side in the second half with Biggar adding two more penalties to edge his side ahead before Steenson returned with his second penalty of the evening to put the visitors 13-12 up with an hour played.

Biggar then landed a drop-goal, which was quickly followed by yet another penalty from the Welshman to put Ospreys into a firm lead. Joshua Matavesi’s interception try after 72 minutes then put the result beyond doubt and sent Exeter back to the West Country empty handed.