RUCK picks our star performers from the second round of the European Champions Cup.

Team of the Round: Wasps take top honours for the second week running as they followed up their record-breaking 33-6 away victory against Leinster with a remarkable 32-6 win against the Champions Cup holders Toulon at the Ricoh Arena.

Player of the Round: Last week we had England fly-half Owen Farrell and this week we have George Ford, showing the toughness of the decision Eddie Jones has on his hand to pick just one. The number 10 was instrumental in his side’s 19-16 victory against Leinster on Saturday, showing real maturity under pressure with his kicking game. The fly-half didn’t miss from the tee and showed great composure to kick the winning penalty from a difficult angle. He also was able to control the game and keep the ball down in Leinster’s half with his tactical kicking, taking the pressure off his side at some crucial times.

Play of the Round: Leicester Tigers second try against Treviso was one that stood out for us with dynamic fullback Telusa Veainu finishing in the right corner following an exception grubber kick from fly-half Tommy Bell. 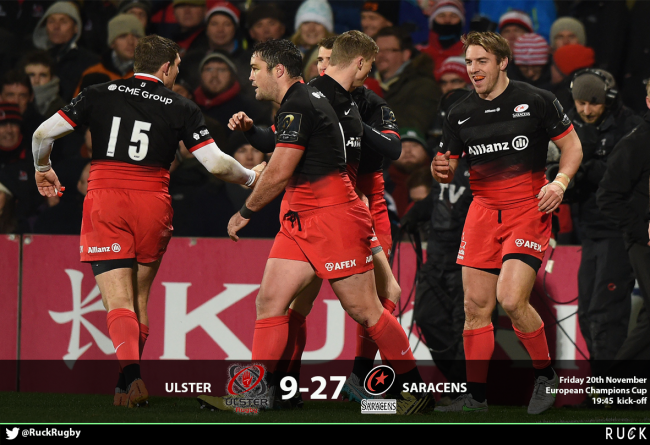 Saracens scored 27 unanswered points as they swooped eight points clear at the top of Pool 1 with a hard-earned 27-9 Champions’ Cup win against Ulster at the Kingspan Stadium.

Ulster’s Paddy Jackson opened the scoring with a penalty on 16 minutes before landing a drop goal five minutes later ahead of his second three-pointer of the evening.

But that was as good as it got for the home faithful as a Chris Wyles try cut the deficit to four points, leaving the score at 9-5 to the home side at half time. And Alex Goode put the visitors ahead for the first time on 61 minutes in what looks set to be one of the plays of the weekend, Owen Farrell converting.

Sarries were in again within minutes as Duncan Taylor rumbled in for an eight-point lead, which Farrell supplemented with a penalty on 73 minutes, before he added another penalty ahead of Billy Vunipola’s converted try with minutes to go which secured a bonus point. 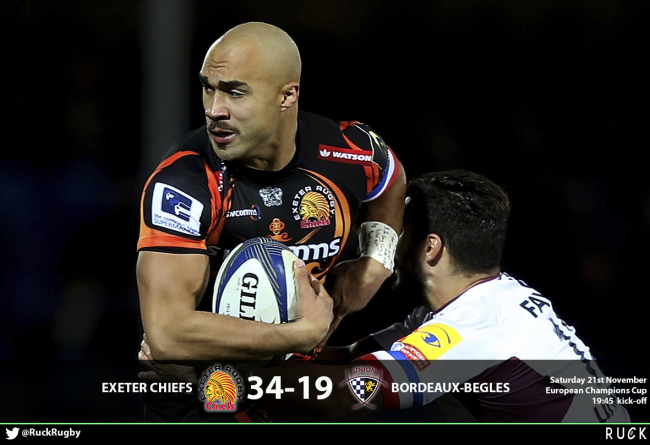 Seven tries were scored in an entertaining clash as Exeter Chiefs steamed to an impressive 34-19 European Champions’ Cup bonus-point win over Bordeaux-Begles at Sandy Park.

An end-to-end start saw Olly Woodburn and Moray Low go in for Exeter, Nans Ducuing with Bordeaux’s reply. Lionel Beauxis converted, while Henry Slade added a conversion on top of an earlier penalty. Slade then kicked another three-pointer shortly after, before notching his third of the evening on the stroke of half time to leave the hosts with a 21-7 interval lead.

Tries came thick and fast after the restart as Ian Whitten and Julien Rey traded scores, before Woodburn and Yann Lesgourgues did the same either side of the hour mark, Romain Lonca with the only further conversion to leave Chiefs defending a 31-19 lead with 18 minutes to play. Slade then notched another penalty eight minutes from time to seal the points.

With Chiefs looking for a quick recovery from disappointing 25-13 defeat at Ospreys last week, they bounced into an early lead on the back of a purposeful start. 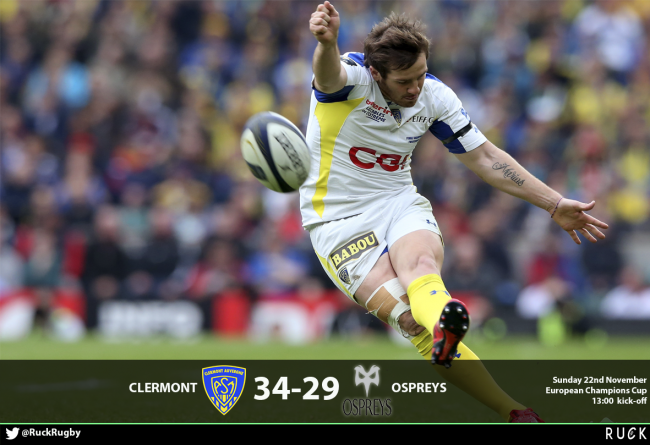 Ex-England wing David Strettle scored twice in a stunning Man of the Match performance as Clermont edged out a spirited Ospreys side 34-29 at Stade Marcel Michelin.

Dan Biggar opened the scoring with a drop goal on 15 minutes before Camille Lopez kicked a penalty to level the scores two minutes later.

And the first try of the game came the way of the hosts as David Strettle rushed in, Lopez converting before Aurelien Rougerie finished off a sweeping team move, Lopez again with the extras to make it 17-3, ahead of a further penalty which produced a 17-point home lead at half time.

But Ospreys enjoyed a perfect start to the second half as Justin Tipuric and Eli Walker got over for quickfire tries, both converted by Biggar, to make it a three-point ball game with 30 minutes to play.

However, Brock James’ introduction sparked a fine late effort from the hosts as Strettle got his second of the afternoon ahead of a Wesley Fofana’s score, but tries from Sam Parry and Tom Habberfield gave the visitors some late cheer, securing two fully deserved bonus points. 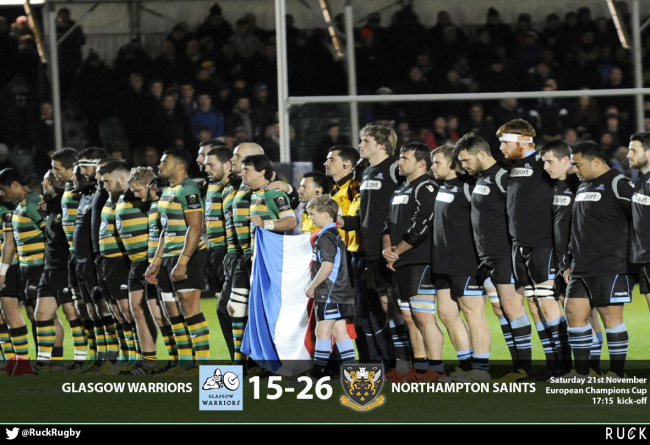 Ahsee Tuala scored two tries for Northampton as they led from start to finish to make it back-to-back European Champions Cup wins with a surprisingly routine victory on the road against Glasgow Warriors.

Jim Mallinder’s men, who edged to a narrow 15-11 home win against Scarlets last weekend, are now guaranteed to be leading Pool 3 after their three-try victory in Scotland tonight. The win also increases their chances of progressing to the knockout stages.

Saints, who attacked right up until the final whistle, though would have been disappointed not to find that elusive fourth try that would have secured the bonus-point.

Meanwhile, Glasgow, who are already in a state of uncertainty regarding when their postponed game against Racing 92 will be played, are now under qualification pressure having lost at home with some tough away trips, including Saints, to come. 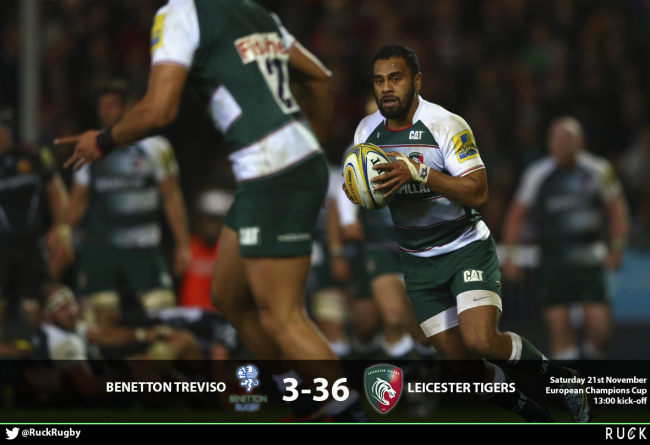 It may only be two games into the European Champions Cup, but Leicester Tigers already appear to be heading for the knockout rounds after completing another bonus-point triumph away against Treviso today at Stadio di Monigo..

Their attacking flair and powerful scrum give indication from the very start that this was going to be the visitors day, with the Italian hosts struggling to deal with international quality embedded throughout Leicester’s starting XV.

The Tigers are guaranteed to lead the way in Pool 5 going into round three due to the clash between Stade Francais and Munster being postponed this weekend due to the attacks in Paris last Friday.

Leicester led comfortably 22-3 at the break, firstly being awarded a penalty try before neat finishes from Telusa Veainu and Peter Betham put the visitors clear. Tommy Bell chipped in with the other seven points from the tee, made up of a pair of conversions and a penalty.

Veainu, who had a score written off earlier in the second half, then touched down his second to complete the bonus-point triumph for the Tigers 12 minutes from full time before replacement Greg Bateman added gloss to the scoreline. Bell converted both tries to complete the game’s scoring. 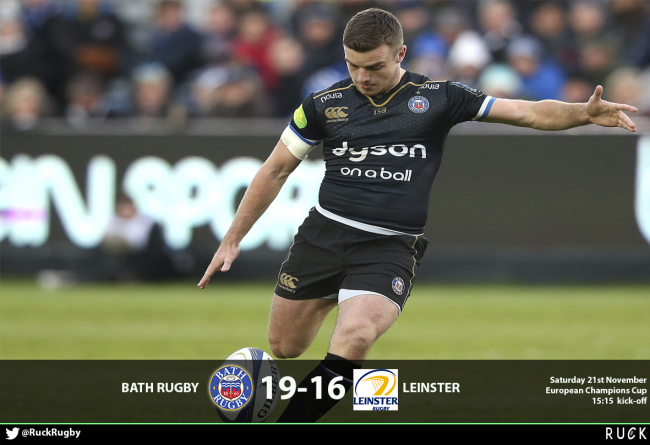 Bath Rugby were able to get their delayed European Champions Cup campaign off to a winning start with a narrow victory against three times champions Leinster at the Rec.

George Ford’s 14-points from the tee combined with a penalty try were enough to see Bath home in an incredibly close game contested by two evenly matched sides.

Leinster now have a mountain to climb after losing their opening two pool games for the first time since 1996 with things getting no easier for the Irish province in the next rounds of fixtures as they have back-to-back clashes against reigning champions Toulon to come. 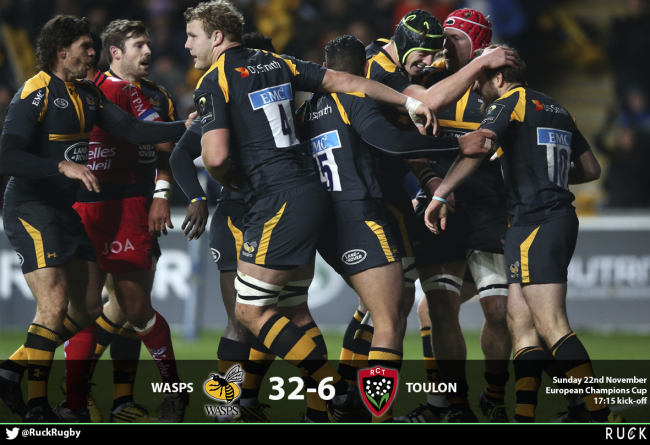 Wasps produced arguably the biggest ever shock in European rugby history as they demolished reigning champions Toulon 32-6 in a remarkable evening at the Ricoh Arena.

Wasps produced arguably the biggest ever shock in European rugby history as they demolished reigning champions Toulon 32-6 in a remarkable evening at the Ricoh Arena.

The hosts enjoyed an outstanding start, racing into a 14-0 lead after ten minutes through Nathan Hughes and Ruaridh Jackson tries, both converted by Jackson.

But Jonathan Pelissie hit back with a penalty goal before Elliot Daly restored the home side’s 14-point lead ahead of a Jackson penalty on 29 minutes. But Pelissie added a second three-pointer to leave Wasps 20-6 up at half time.

However the game’s next score came on 50 minutes and it was Frank Halai who got it, Jackson with the extras, and Hughes got his second try of the night on 66 minutes to round off the scoring and secure a stunning bonus-point win for Dai Young’s men.