George North appeared to be knocked out cold playing for Northampton tonight as the Wales star found himself at the centre of a major controversy.

BT Sport pundit Ugo Monye said: “I don’t think George North should be on the pitch it’s a simple as that. 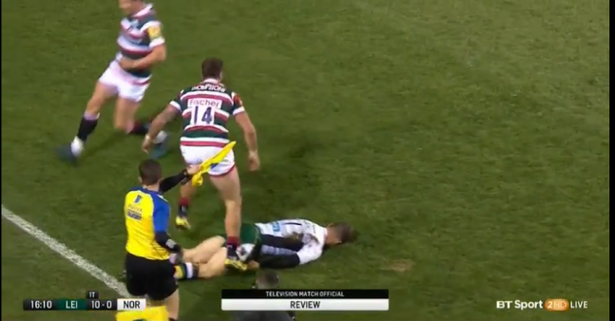 “If there is any suspicion that someone has lost consciousness you should be taken off the pitch. You should not take any further part in the game.

North, who has previously suffered a series of concussions that led to him being ordered to stand down from all rugby last year, was left lying motionless on the ground after a mid-air collision with Leicester Tigers’ Adam Thompstone, who received a yellow card for the challenge.

A Premier Rugby spokesman confirmed to Sportsmail disciplinary procedures would follow if Northampton – who deny North was unconscious – are suspected of failing to follow protocols.

What do you think? Should George North of been forced to leave the pitch????