Leicester Tigers travel to face Exter Chiefs at Sandy park this weekend, looking to keep their one hundred percent record intact. RUCK highlighted fly half’s Owen Williams and Gareth Stenson as they key battle of round four in the Aviva Premiership as both teams attempt to keep pace with league leaders Saracens.

Both players have started the season well, and have been in good form from the tee and were instrumental in both sides wins last weekend. Williams kicked 14 points in the Tigers 24-16 over new neighbours Wasps while Chiefs captain Steenson also played a pivotal role in his side’s away win against Newcastle Falcons, weighing in with 11 points, made up of four conversions and a penalty.

The pair has much more to offer than just their kicking though and can link with their backs well with precise passing, which enables their teams to get on the front foot. 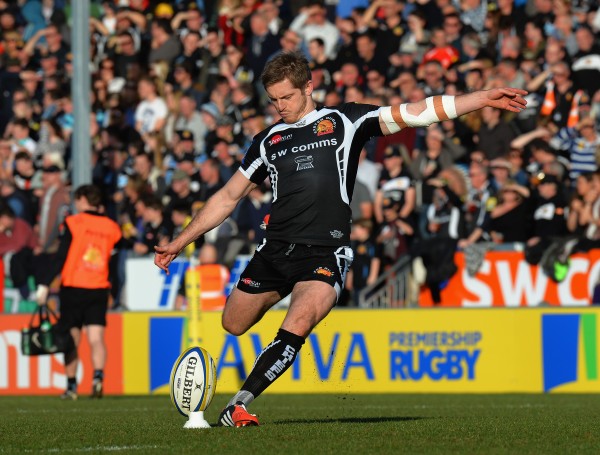 Steenson specifically has been able to form a very efficient, free-flowing partnership with his centre and kicking Partner Henry Slade. The Chiefs number 10 can bring Slade into the game and vice versa as both players complement each other well, and always look to support one another when on the attack with well directed supporting runs.

After missing the majority of last season with a knee injury, Williams has stepped back into the fold when he replaced the injured Freddie Burns, who is out with a broken jaw.

The number 10, in fact, has been a critical factor in Leicester’s solid start to the season, initially returning to action via the bench against Harlequins where it was his perfectly placed penalty kick to find touch from a virtually impossible angle, which gave the forwards the chance to win a very close game.

Williams also has plenty to offer in defence, and showcased his tackling skills against Wasps, chasing down Elliot Daly, who looked sure to score a try. He was then able to scoop up a loose offload and help get his side out of danger when a try seemed inevitable.

Both players are vastly experienced, and their big game experience and leadership skills really help their teams out, particularly in close games. Both fly-halves will need to be at their best to give their side the best chance of winning, and with the game so evenly matched on paper, a penalty goal or conversion from either man could very well prove the decisive moment of the game in the closing stages.