Ever since I was little, rugby has played a big role in my life. After all, I was pretty much born into a rugby family, my parent’s rings were carried on a rugby ball at their wedding (I know how did my mum agree to that right..😂) my brother plays, my dad, played his whole life and has been my coach most of my life.

Being a girl and playing rugby has not come without difficulties though…I found it quite hard through school as it was often something I was teased and bullied for by boys when you are growing up as a teenager.

It even got to the point where I gave up playing for a few years which I look back on and realise how silly I was being for caring what people think!!

Soo my journey has inspired me to write this blog and the common stereotypes we face and how you shouldn’t assume anything about people’s lives. 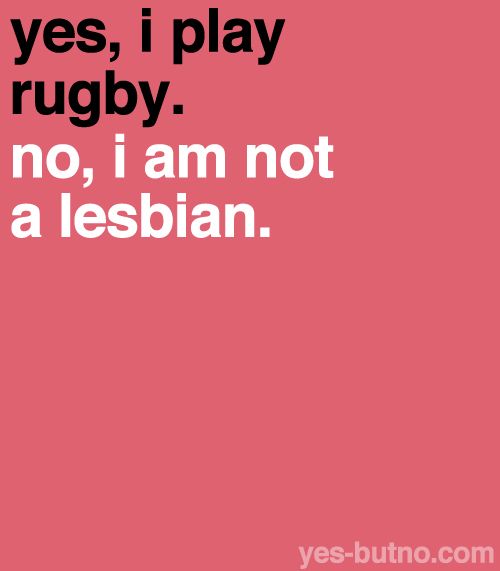 Yep if you are a female rugby player you therefore must love getting with girls and be a lesbian. For sure there are lesbians but that’s with any sport like netball or hockey or basketball.. I have been straight my whole life, I have a boyfriend and I am only attracted to men. In fact my boyfriend plays rugby too and it’s how we met, so there are some guys out there who think it’s pretty cool but FYI we’re not all lesbians…

Suffering with resting bitch face since 97🙋🏼

Ok hunny, I’m not sure if you’ve tried to be a winger on a rugby field for 80 minutes including tackling, kicking and sprinting for the try line but I can assure you it is not easy and you have to be pretty damn fit. Yes there are all shapes and sizes on a rugby field but most players are probably twice as fit as you! Also have you ever heard of the other game rugby 7’s which is my favourite game in the summer. You have to literally constantly sprint for 7 minutes each half and you will play sometimes 8 matches in one day. So yeah I’m not fat and butch I have to be in good shape!

Right, have you ever heard the phrase ‘get someone who can do both’ well I’m one of those people. Yes I may be on the rugby field covered in mud up to my ears with the occasional blood running down my leg. But you will also find me with a full face of make up, spending an hour doing my hair, dressed in heels and a play suit going out and having a good time feeling ‘feminine’.

4. I often hear the phrase ‘What.. YOU play that sport?!’ And ‘you can’t be very good considering your size.’

Summer social 7s was the best day, I also have the cutest parents 👨‍👩‍👧💕

This probably makes me the most angry, if you have ever watched a game of rugby you may realise that some of the smaller players can be the most dangerous on the pitch using their speed and agility to score unexpected tries. Also just because I don’t look like an ogre, it doesn’t mean I can’t play rugby, I would say that my tackling is one of my stronger skills in rugby due to having technique drilled into me for years. I don’t mind tackling the biggest girls on the pitch as I know if I get into the right position they will come off worse than me!

5. “You’re going to get really hurt, you shouldn’t play”

Ok so granted I am writing this with an injury right now but bearing in mind I have been playing since I was 4 years old and only experienced a handful of injuries. Yes injuries do happen but that is just like any sport. If you are coached well, physically fit and have a good technique you aren’t likely to experience lots and lots of injuries. I often find the worst injuries are when it is very social and alcohol is involved and there is very little experience on the pitch.

So to conclude, no matter who you are (obviously I am writing this for females) you CAN play rugby. Who cares if someone doesn’t think it’s right. If you are interested I urge you to take it up and try it. You may pick up more bruises than normal but your fitness will improve, it is much more interesting than running on a treadmill and you will gain a tonne of friends in the process.

Lots of love as always,

“Farrell would be a waste” – Austin Healey picks his Lions bolters