This was quite a heroic win for Ireland as they continued their perfect record in the Rugby World Cup thus far, and set themselves up for an easier road in the knockout stages as they take on Argentina in the final eight rather than the reigning world champions New Zealand.

Joe Schmidt, Ireland head coach, who masterminded their back-to-back Six Nation triumphs in 2014 and 2015 now has the task of getting the men in green to a World Cup semi-final for the first time in eight attempts.

Despite losing talismanic fly-half, Johnny Sexton in the first-half, Ireland’s Ian Madigan proved a fine replacement, kicking confidently as well as ensuring their backs and forwards continued to combine excellently in both attack and defence.

Ireland also lost their iconic Captain Paul O’Connell seconds before half-time with the skipper left on the ground in a lot of pain. He was replaced by experienced second-row Iain Henderson.

Phillipe Saint-Andre, France head coach, would have been disappointed that his team could not take advantage of the Irish absentees in the second-half with too many of his stars failing to make an impact on the game.

In front of a sellout crowd in Cardiff, the Irish won simply because they played the way they wanted; on the front foot with some excellent free-flowing rugby. Meanwhile, they also did well to neutralise the French’s dangermen with Freddie Michalak, Wesley Fofana, etc, struggling to do anything of note.

Although Ireland dominated first half possession and territory they were unable to open up a significant lead against Les Bleus, outscoring their opponents by three penalties to two to lead narrowly at the break, 6-9.

Without their leader and their engine though the men in green continued to press Les Bleus and eventually opened the try-scoring through fullback Rob Kearney.

France’s Morgan Parra cut the gap to five points from the tee, but Ireland secured the win with their second score, compliments of their efficient scrum-half Conor Murray. Replacement Madigan then converted before kicking a penalty that proved to be the final score of the game, 9-24.

Sexton and Michalak exchanged penalties in the opening exchanges as both nations attempted to get a foothold in the game. Ireland then snuck in front as their fly-half kicked another from the tee after 18 minutes following some sustained pressure from the home nation, 3-6.

But fullback Scott Spedding leveled things up for France after 22 minutes with a long-range strike from just short of the halfway way line.

Ireland then lost Johnny Sexton after 25 minutes to a suspected groin injury with vibrant Madigan replacing him.

And the replacement fly-half made a dream start by putting over a penalty to put Ireland back in front, striking the ball from long range, 6-9.

But there was another major blow for Ireland as they lost Skipper O’Connell seconds before the break. However, they did hold on to their narrow three-point lead at the break.

Despite losing two of their most influential leaders, Ireland continued to dominate possession and territory after the restart before eventually opening the try-scoring after 49 minutes.

Following numerous phases of play deep in the French 22 the ball was quickly recycled to fullback Rob Kearney, who bulldozed past Michalak to force the ball down. Madigan though could not add the extras, 6-14.

Morgan Parra off the bench clawed back three points for the French after 64 minutes from the tee to cut the gap to five points, setting up a grandstand finish.

However, Ireland secured the result and the easier quarter-final when they scored their second try after 70 minutes. Rory Best almost reached the line but was held up before Murray picked up and touched down against the post.

Madigan added the extras this time before kicking a further three points from the tee to complete the afternoons’ scoring, 9-24.

Man of the Match: Sean O’Brien 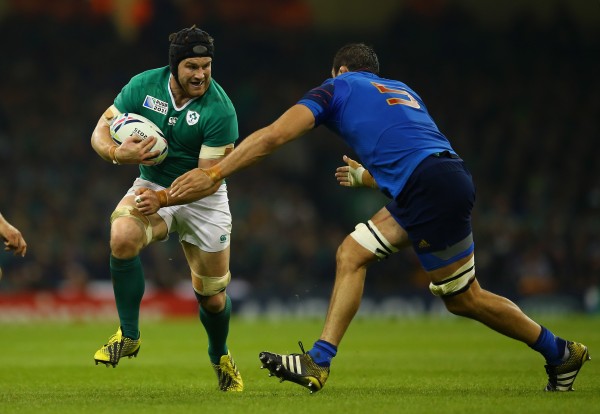 The flanker’s performance today was nothing short of incredible, with some big hits, crucial turnovers and strong carrying making him the standout player of Ireland’s fantastic victory. He also stepped up during the absence of Captain O’Connell to lead the team both in attack and in defence.