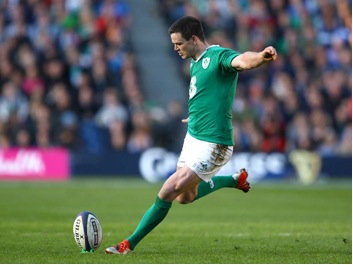 The reigning Six Nation champions, who are bookies favourite to win Pool D, have selected a strong starting line-up with star man Johnny Sexton and iconic Captain Paul O’Connell both called to duty.

Joe Schmidt, the Ireland head coach, has made four changes to his starting XV as he looks to rejuvenate his side following their 21-13 loss at Twickenham a fortnight ago.

The first of the alterations has Leinster back Luke Fitzgerald come in at centre for the injured Robbie Henshaw, who has been ruled out with a hamstring injury.

Rob Kearney is back at fullback after returning from a knee injury while scrum-half Conor Murray has recovered from a concussion to form his efficient half-back partnership with fly-half Sexton.

Celebrated prop Cian Healy will also make his return to Test rugby as a replacement after completing his rehabilitation from neck surgery.

Meanwhile, Canada endured a dismal Pacific Nations Cup in the summer, finishing in last place following their 15-13 defeat to The USA in their fifth place play-off.

However, the Maple Leafs have since bounced back with successive victory’s against Glasgow Warriors and Georgia respectively before losing their final warm-up match 47-18 against Fiji at Twickenham Stoop.

Clermont veteran Jamie Cudmore will Captain Canada for the first time at a World Cup this weekend after Skipper Tyler Ardon failed to recover from a knee injury.

While in an experienced back three that combined boasts over 70 Test caps Scarlets and Ospreys wings DTH van der Merwe and Jeff Hassler are named alongside Cornish Pirates full-back Matt Evans.

Hassler is one of eight World Cup debutants in Canada’s starting XV while Skipper Cudmore is featuring in his fourth tournament for the Canucks.

Historically between the two Ireland have faired the better, winning five of the six previous meetings comfortably, but back in 2000 a clash in Toronto between the pair almost was a massive upset.

It was a match that Canada ought to have won as the Canucks held a 21-8 lead at half-time, but the Irish fought back, and it ended all square at 27 points a piece.

But 15 years on a lot of things have changed as Ireland have transformed themselves into a heavyweight nation in international rugby while Canada’s glory days of 1990’s are well and truly behind them.

Big things are now expected of Schmidt’s men at this World Cup following back-to-back Six Nations successes, with the Irish faithful eager to reach their first World Cup semi-final at the eighth attempt.

Ireland can grow into the tournament with what should be a relatively routine victory against Canada in their opening match. The Canucks are not the rugby nation they once were and although they still have some good players they will undoubtedly struggle to live with the Irish’s physicality from the very start.

15 Reasons why Ireland MUST host the 2023 Rugby World Cup