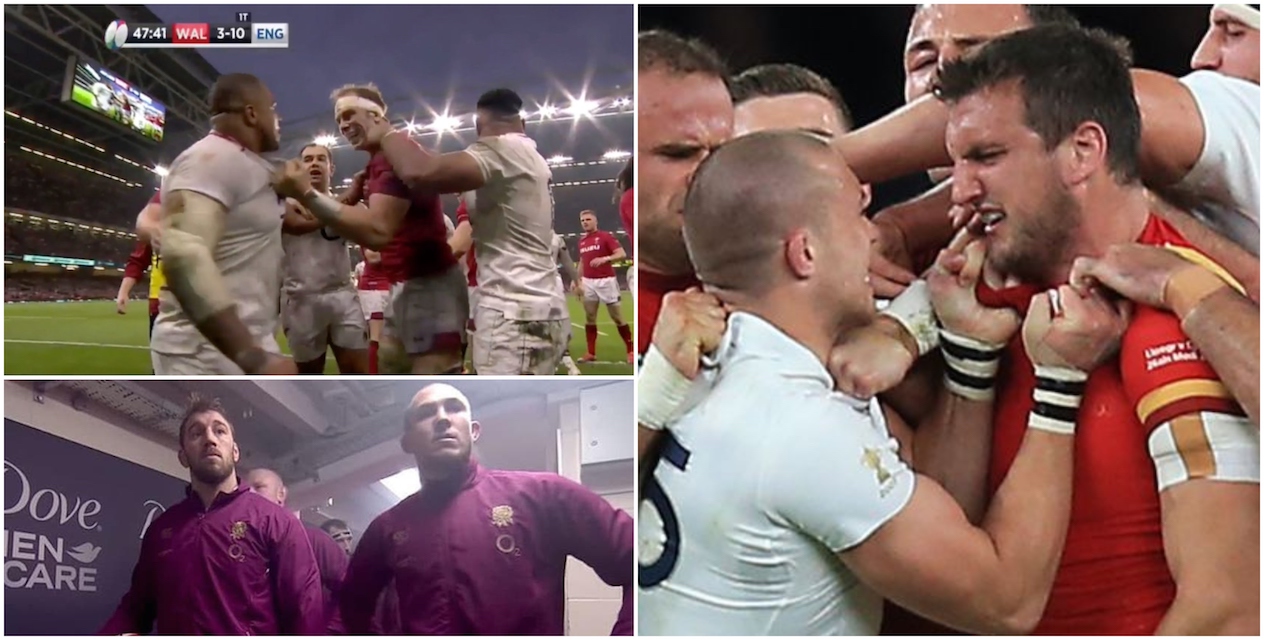 It often gets heated.

As the teams headed out onto the pitch England captain Chris Robshaw asks the referee whether Wales will lead the way. England’s injury-hit team came from 10 points down to record a famous 21-16 victory in Cardiff and take revenge for their record 30-3 mauling two years prior.

England lock Wade Dooley hits Wales number 8 Phil Davies hard with a violent right hand from behind that forces him off the field with a broken jaw during the 5 Nations match in March 1987 at Cardiff Arms Park.

The game exploded when England’s players were angered by a Dan Lydiate tackle on Tom Wood and a melee of more than a dozen players ensued. Warburton was in the thick of it, rushing to the defence of Lydiate who had several English bodies in his face, led by the unflappable Brown.

He faced a barrage of criticism from rugby fans on social media after laughing at Scott Williams in an altercation immediately after the Wales star was denied a try at Twickenham. Simply, Brown being the pantomime villain.

The Wales captain targeted the England prop until he blew his lid.

Since William Webb Ellis picked up the ball at Rugby School and ran like Jonah Lomu for the opposition line in the latter half of 1823, so began the oval ball game.

And with it came some of the most intense rivalries the sporting world has seen. While football may have the upperhand in club rivalries, on the international scene it’s rugby that holds sway given the frequency they lock horns on the Test stage.

They’re the clashes that set the pulses racing more than any other with the prospect of a full-blooded encounter with the odd bout of fisticuffs thrown in for good measure.

Glasnost is put on the back-burner and though not a high profile as some Test matches, there’s very little love lost in the 18 games these two have played since their inaugural clash in 1993.

Before the end of the Soviet Union many of the early clashes involved team-mates but it didn’t prevent frequent bouts of fisticuffs and to date Russia have just one draw and 17 defeats to their name against the Georgians.

Games attract crowds in excess of 50,000 and with Russia ploughing more money into developing rugby, don’t expect the rivalry to end any time soon.

Keep an eye on this one!

An all-Celtic squabble that has its roots in a brawl in a Belfast theatre in 1914, when Wales’ notoriously combative forwards – the ‘Terrible Eight’ – were allegedly set upon by their Irish counterparts.

The game that followed was dubbed the roughest ever played, and so the tone was set for a rivalry which – while not quite brimming with the kind of political and cultural animosity that marks both nations’ meetings with England, regularly provides fireworks.

Their meeting in 2005, which saw Gavin Henson and Brian O’Driscoll go at each other like rabid dogs, while there is still resentment in Ireland over the treatment meted out to Brian O’Driscoll on the 2013 Lions Tour, which Warren Gatland pack his side with Welshmen. “Probably, out of all the teams in the Six Nations, the Welsh players dislike the Irish the most,” Gatland noted in 2009. He’s probably still right.