Keep up with all the latest results from the first day of the Men’s Sevens at the Olympics in Rio. 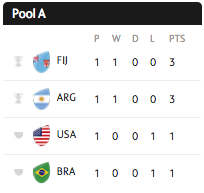 There was a really even start before Argentina took a quick tap penalty with Axel Muller scoring to give the Pumas a 7-0 lead at the break. Fernando Luna then put the South Americans further ahead, 0-12.  Argentina Matias Moroni then put a hit on Garrett Bender but immediately knew he’d not got his technique right and sees yellow for a tip tackle.

The USA took advantage of the extra man as Zack Test turned on the gas. He looked to be held up by Racing 92’s Juan Imhoff but referee Craig Joubert controversially judged his tackle to be high and showed him a yellow and awarded the USA a penalty try.

Nevertheless, Argentina showed all of their flair as Matias Moroni snatched the match with the very last move of the game. The scoreboard had ran away from Brazil in the second-half but Gustavo Albuquerque had the final say of the match for Brazil with a consolation try.

Fiji were the hot favourites in this match but one slip in defence and Felipe Claro opened the scoring for Brazil. The Fijians responded with Jasa Veremalua’s converted score giving them a narrow 7-5 lead at the break. The Pacific Islanders took full control after the restart with five further tries securing a commanding victory. 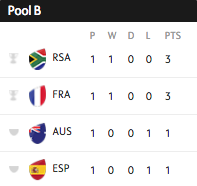 Terry Bouhraoua scored the first try in the competition before Terry Bouhraoua powered over to give Les Bleus a commanding lead at the break, 0-17. The Aussies made a fast start to the second-half as firstly Jesse Parahi punched a hole through to score before Ed Jenkins added their second, 14-17. Nevertheless, the fightback was stopped by further scores from Manoel Dall Igna and Bouhraoua as France completed the upset.

The Blitzboks were the first off the mark as they punished a Spanish mistake at the breakdown. Off the possesion the ball was whipped out wide to Cecil Afrika and the speedster added the conversion to edge further in front, 7-0. Afrika then picked his spot and powered through the Spanish defence for his second. He then added the conversion to give the Blitzboks a 14-0 advantage at the break. Seabelo Senatla shows his dancing feet and adds another try after the restart before Philip Snyman went over from close range to complete the scoring. 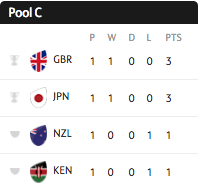 Great Britain made the perfect start to their Olympic Sevens campaign as they beat Kenya in Rio. First, Dan Norton evaded Oscar Ayodi and flew down the left-wing to score before James Rodwell offloaded to send Phil Burgess in for their second, 12-0. Captain Tom Mitchell then made a beautiful floating pass out into the hands of Dan Bibby, who finished routinely in the corner. Scotland international Mark Bennett confidently flew down the right-wing to add a fourth try soon after with Mitchell converting to give Team GB a 24-0 lead at the break. After the restart, quick hands and offloading in the middle of the park got Billy Odhiambo free to break and score Kenya’s opening points, 24-7. Team GB though secured the win as Bibby took the outside line to add his second and Team GB’s fifth.

Japan have made the biggest upset in Sevens history after beating New Zealand in the Olympics with what was an immense performance! Sublime offloads out the back meant that Teruya Goto shockingly opened the scoring  for Japan. New Zealand weren’t rattled and went down the other end with Scott Curry levelling the scores with his try, 7-7. Just after Sonny Bill Williams left the field injured,  Akira Ioane used every ounce of his strength to blast through the middle of the Japanese defence and give the men in black the lead. Nevertheless, their lead was short-lived as Japan, brimming with confidence, retook the lead through Kameli Soejima.