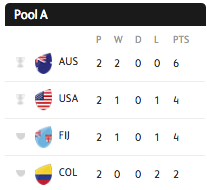 USA bounced back from their defeat against Fiji this morning by convincingly overcoming Colombia 48-0 in Rio. Alev Kelter’s first half brace combined with scores from Lauren Doyle and Kathryn Johnson got the USA well and trully back on track with the Eagles leading 24-0 at the break.

The Eagles continued to soar after the restart with Jessica Javelet, Ryan Carlyle, Johnson and Joanne Faavesi adding further scores to secure the win.

Gold medal favourites Australia continued their dominance with an imposing 24-0 win against Fiji in the final match of the day. Emilee Cherry opened the scoring before Emma Tonegato touched down and Charlotte Caslick added a third, her fourth of the day, to put the Aussies 19-0 ahead at the interval.

The girls in gold continued to dominate in the second half with Ellia Green,Tonegato and Chloe Dalton adding further scores. 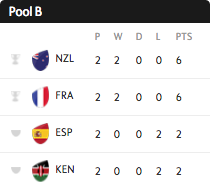 France opened up the second session against Kenya and took the lead when Caroline Ladagnous, with a dip of a shoulder darted through a gap to open the scoring after four minutes. Kenya were able to level the scores through Celestine Masinde but after the hooter Jade le Pesq dotted down to put Les Bleus back in front at the break, 14-7.

After the restart the French took control with tries from Fanny Horta, Lina Guerin, a second from Ladagnous and Audrey Amiel giving them a comfortable win to set up a pool decider against New Zealand tomorrow.

Six tries in all also mean Les Bleus are going to comfortably progress to the quarter-finals.

Portia Woodman followed up her hat-trick in session one by opening the scoring against Spain. A third try of the day from birthday girl Kayla McAlister then put New Zealand 12-0 up at the interval.

The Kiwis continued to dominate early in the second half when Tyla Nathan-Wong crossed the whitewash but Spain replied with a try of their own through Maria Casado. Nevertheless, New Zealand struck back as McAlister grabbed her second before Theresa Fitzpatrick dived over in overtime, thus securing the win for New Zealand and their place in the final eight. 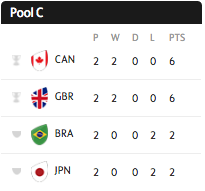 Great Britain have booked their place in the quarter-finals after a dominant victory over Japan in Pool C. Amy Wilson Hardy turned on the afterburners to open the scoring for Great Britain after just 26 seconds. Alice Richardson, Joanne Watmore and Katy McLean then added further scores to give Team GB a imposing 26-0 lead at the break.

Replacement Emily Scott didn’t take long to get GB going in the second half but they were reduced to six women when Jasmine Joyce was sent to the sin bin soon after for throwing the ball away. A huge handoff by Heather Fisher though put the big tackling forward in the clear to score under the sticks and complete the scoring for Team GB.

A relentless start by Canada saw Karen Paquin, a veteran of 53 tries on the World Series circuit, dart in for the first score of the game. Further tries from Jen Kish, Karen Molesch and Paquin ensured the reds held a healthy 26-0 lead at the break.

The hosts Brazil started well after the restart, but Canada’s ruthlessness was on full show late on as Bianca Farella grabbed a brace in the final two and half minutes to secure the win.