After a busy third weekend, who makes our Gallagher Premiership Team of the Week? Unsurprisingly, Gloucester and Exeter stars headline our selection…

Gallagher Premiership Team of the Week 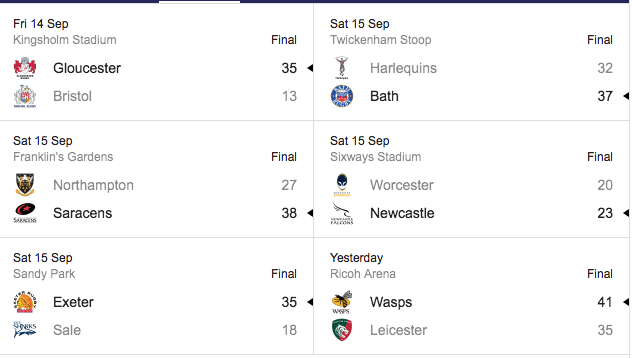 Finished superbly for his first try, almost did it again a couple of minutes later and added a second in the second half. Made more than 150m with ball in hand.

His fend, step and pass to set up Jack Maunder’s 49th-minute try was outstanding and effortlessly ripped through the Sharks’ defensive line. Slade is a classy outside-centre with all of the skills, he looks razor-sharp right now and so do Exeter Chiefs.

He puts a try on a plate for Jack Maunder as Exeter come from behind to get a bonus point win vs Sale. #GallagherPrem pic.twitter.com/krAB8N1CTn

Had much more punch with his carries than in rounds one and two. Mixed up his play well by bringing others into the game and scored a try against his old team.

There is life in the old dog yet. Strettle may be the oldest winger in the Premiership but, at the grand old age of 35, he rolled back the years to snatch a Saracens victory with two tries in three minutes.

2⃣ tries, 2⃣ expert finishes in the corner.@David_Strettle was unaware they were his 50th and 51st tries in @premrugby but praised the forwards for allowing the backs to have quick ball. ⚫️🔴👉 https://t.co/iIHDY0Wusd pic.twitter.com/gfoSdAVaWT

Former All Black Lima Sopoaga received rave reviews for a match-winning goal kicking performance on his English rugby debut. The 27-year-old kicked 17 points in Wasps’ 41-35 win over the Leicester Tigers in their Midlands derby in Coventry on Sunday