Revealed: The Most Popular Surnames In International Rugby
Skip to content
Six Nations 2020

The most popular surnames of international rugby players have been revealed according to data collated by one of the country’s leading sports equipment suppliers.

With the much-anticipated NatWest Six Nations Championship 2018 now under way, award-winning online retailer, Net World Sports, has analysed and ranked the surnames of every Welsh Six Nations rugby player since the Championship formed in 2000 and the most popular surnames in international rugby for all the home nations.

‘Davies’ and ‘Thomas’ were nearly tied for the 3rd and 4th spots; ‘Davies’ kicking ‘Thomas’ off the park by a mere 4 caps.

The wooden spoon was awarded to ‘Robinson’ who would finish at the foot of the Net World Sports table, receiving a total of only 5 caps split between 2 players.

Figure 1. The Most Popular Welsh Surnames In 6 Nations History 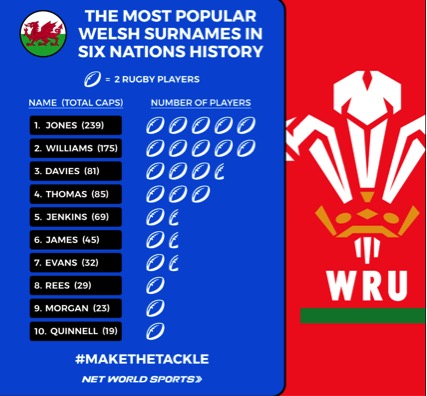 As well as analysing the surnames of Welsh Six Nation rugby players, the sports firm, which supplies a comprehensive range of rugby tackle pads, posts, balls and training equipment, also analysed the most popular surnames in international rugby for all the home nations.

In Scotland, ‘Smith’ gains the most possession enjoying a total of 250 caps shared between 15 players. Close to charging down the Scottish top spot was ‘Brown’ who boasted an impressive 196 caps, again, shared between 14 players.

Towards the rear of the field, ‘Ross’, ‘Stewart’ and ‘Campbell’ make up the final trio of the table scoring 63,60 and 87 caps respectively.

Figure 2. The Most Popular Scottish Surnames In International Rugby 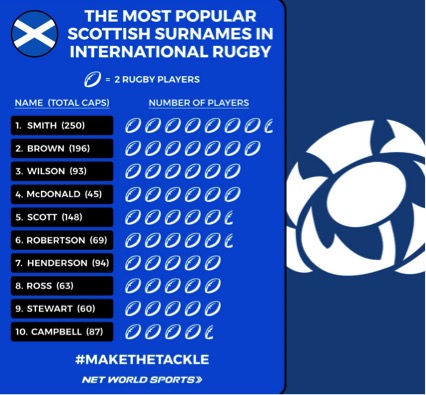 Across the border and into England, ‘Wilson’ charges across the gain line with 10 players championing 65 caps between them.

Providing support to the red rose campaign is ‘Smith’ and ‘Taylor’ who each share 60 caps from 10 and 9 players respectively.

Figure 3. The Most Popular English Surnames In International Rugby 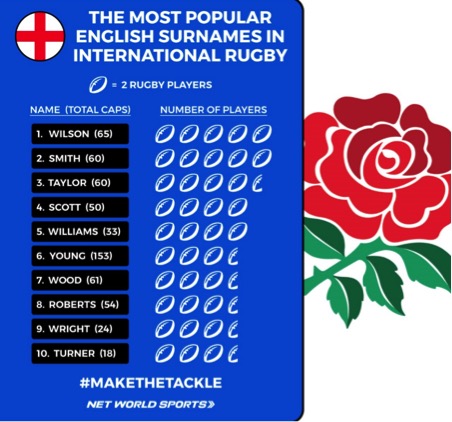 Across the North Sea and into Ireland, ‘Wallace’ takes dominance in the surname scrum boasting 207 caps shared between 11 players.

‘Murphy’ and ‘Brown’ tally up a close second, again enjoying 11 players, but falling short with only 173 and 34 caps respectively.

Firmly in the second row of the table are a ‘McGrath’, ‘Ross’ and ‘O’Connor’ trio each tied with 7 players and a total of 218 caps between them.

Figure 4. The Most Popular Irish Surnames In International Rugby 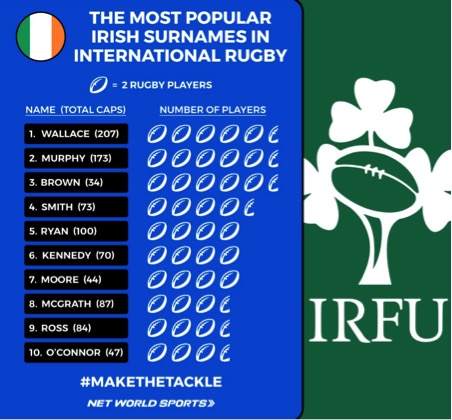 It was awarded the ‘International Trading Business of the Year’ crown at the inaugural North Wales Business Leaders Awards 2017 while it was also a finalist in the 2016 National Business Awards.

Led by a dynamic and passionate team, Net World Sports has become renowned for its winning combination of quality products, unbeatable value for money, exceptional customer service, and rapid distribution, with next day delivery available on virtually all UK orders, 1-day shipping to the USA, and 2-day shipping to Australia and New Zealand.

Ellis Genge smashes his way through Harlequins for try

Three players who are blacklisted by Warren Gatland – and why