Spain’s players celebrated as if they’d won the Rugby World Cup after a famous 22-10 win over Romania on Sunday put them in pole position to qualify for rugby’s showpiece tournament for the first time since 1999.

Hundreds of fans poured onto the pitch at the Estadio Nacional Universidad Complutense following the final whistle to congratulate their heroes who had produced one of Spain’s finest performances for many a year. 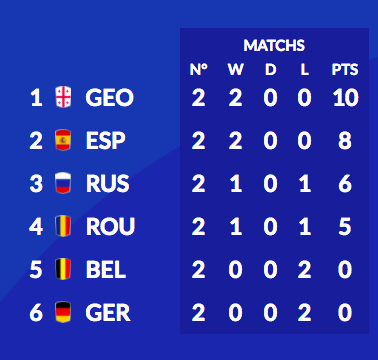 Early tries from prop Benat Auzqui and Sebastien Ascarat and four penalties from the boot of Brad Linklater secured Spain their first win over the Oaks in six years and took them one point clear of their beaten opponents at the top of the RWC 2019 qualification table.

With matches to come against the bottom two sides Germany and Belgium, on 11 and 18 of March respectively, following their regular Rugby Europe Championship fixture against Georgia in a fortnight’s time, Los Leones’ destiny is now firmly in their own hands in the race to claim the ticket to play in Pool A as Europe 1.

Elsewhere, Russia finished strongly to beat Belgium 48-7 and remain in contention for the RWC 2019 Europe play-off game against Portugal, or even the Europe 1 spot if they can beat Romania, on 3 March, and Spain slip up in the penultimate two rounds.

Already guaranteed to be at Japan 2019, Georgia’s sole focus in the Rugby Europe Championship is to reclaim the title they lost last year to Romania.

And Milton Haig’s side improved on their 47-0 opening day win over Belgium by beating Germany 64-0 in Offenbach – the first time they have achieved back-to-back clean sheets in test rugby.