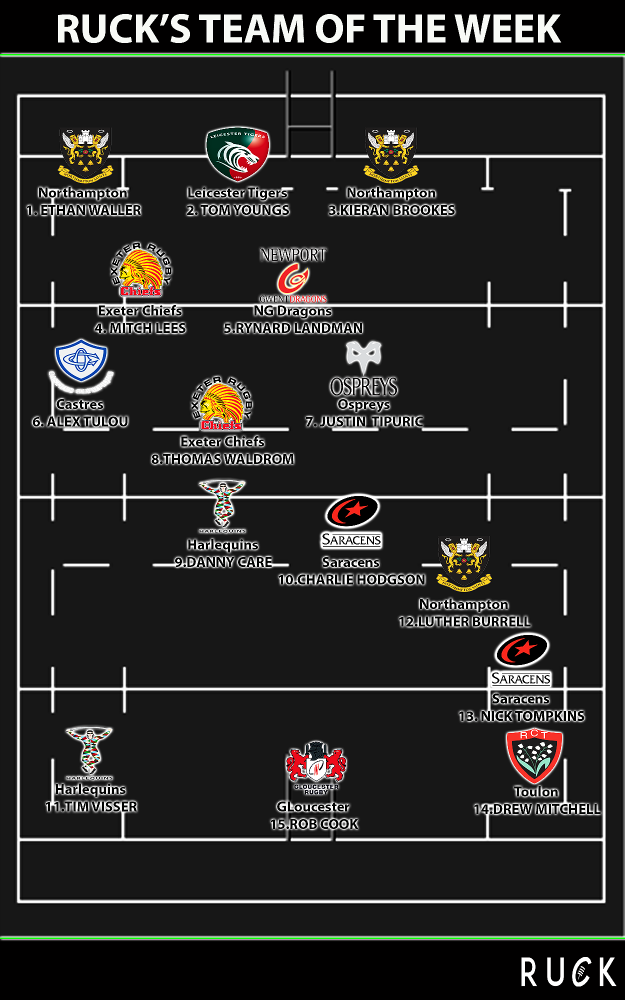 It’s been another pulsating weekend of club action with teams looking to go into the European break on the back of a positive result, and these are the players we think starred.

But who were your stand-out performers? After much debate here is our final selection – do you agree? Comment below.

The Cherry and Whites, who hadn’t scored a try in 180 minutes of Premiership rugby, took just two minutes to cross the whitewash for the opening score during their 23-19 win against Sale through Cook, with the fullback touching down in the corner. The 31-year-old continued to be a thorn in Sharks’ side throughout, playing a pin-point pass to Sione Kalamafoni for the number 8’s first score during a crucial period in the second half.

The Australian veteran ran in two high-quality tries as Toulon overcame Agen 53-23 in the Top 14 on Saturday. Mitchell’s experience, quality and intelligence make him one of the most consistent players in their star-studded line-up and despite his older years he is still fantastic to watch.

In what was a competitive game for long periods, Tompkins eventually blew the scoreboard open with 17 minutes to play. The slick 20-year-old centre’s barnstorming try played a significant role in propelling Sarries to the 38-3 bonus-point win at Kingston Park.

BATH, ENGLAND – DECEMBER 05: Luther Burrell of Northampton dives over to score a try during the Aviva Premiership match between Bath and Northampton Saints at the Recreation Ground on December 5, 2015, in Bath, England. (Photo by David Rogers/Getty Images)

The centre continued his fine form as Northampton powered past Bath 13-11 on their travels. Burrell made some big hits while also showing good instinct to pounce on George Ford’s wayward pass to score Saints’ only try of the game. It’s been a tough year for the Northampton man, but he is finally getting back to his best. An international recall at this stage looks inevitable.

Visser stole the show as Quins overcame London Irish 38-7 with ease at the Stoop. Scotland’s Dutch-born wing claimed a hat-trick of tries, each of which took some finishing with the 28-year-old’s strength and pace proving the undoing of Irish’s defence. He is already a strong candidate for signing of the season

In a game against the Falcons where the chips were often down for Sarries, Hodgson pulled the strings to guide the champions comfortably over the line in the end. Aside from his 21-point haul, his stellar general play showed he can still perform at the highest level, despite retirement approaching at the end of the season. Announcing his retirement at the end of the season may have been a mistake if he can maintain this sort of form.

England scrum-half Care made a couple of provocative breaks before touching down Quins second try. He then turned provider for the hosts third score when he slipped in Visser for the wingers second.

This was a huge shift from the loosehead, who replaced his brother and proceeded to bully Bath in the scrum as well as making a significant carry or two. He also shoved the veteran Henry Thomas into the sin bin, which was an achievement in itself. His steady progression in the last few weeks has been impressive to say the least.

Despite some ragged initial work in the line-out, the hooker was superb with the ball, helping Leicester back into the game. Tigers’ distribution was notably cleaner following his introduction off the bench mid-way through the first half. Probably England’s best available hooker at this time on both ability and recent form.

It has been said before, and it must be said again – what a signing Brookes has been for Saints. Ruined another loosehead’s afternoon as he took the vastly experienced Nick Auterac to hell in back. His scrummaging, his intensity and his precision so far this season surely will take him from England bench warmer to starting XV regular if he continues to impress.

Lees man of the match display as Exeter Chiefs edged out Wasps 41-27 at the Ricoh on Saturday evening was nothing short exceptional. The Australian back-rower, who also touched down a try in the game, signed for Exeter from Championship side London Welsh in April 2014 and has gone from strength to strength in recent times with a new found aggression, particularly so far this season.

Rynard Landman made Munster pay for their missed opportunities as Newport Gwent Dragons completed a Welsh clean sweep of Pro12 wins with a 22-6 victory this weekend. The second-row scored the game’s only try with three minutes to go, selling a neat dummy to step inside two defenders and pile over.

The flanker was the hat-trick hero against his former club as Castres upset the odds to beat Montpellier 34-19 in the Top 14 on Saturday.

Justin Tipuric scored two tries as the Ospreys secured a third straight Pro12 success, 39-22 away to Zebre in Parma. The outstanding back-rower showed his pace to chase  down and pounce for his first before bagging his brace after the break with another remarkable burst of speed, displaying nice footwork to dodge a defender to dive over again

COVENTRY, ENGLAND – DECEMBER 05: Thomas Waldrom of Exeter Chiefs makes a break during the Aviva Premiership match between Wasps and Exeter Chiefs at the Ricoh Arena on December 4, 2015, in Coventry, England. (Photo by Matthew Lewis/Getty Images)

Waldrom scored two tries in the opening 40 before completing his treble after the break to swing the game back in Exeter’s favour when the visitors pack drove the number 8 over the line. The outstanding individual performance saw Waldrom become the first player to score a treble for the club in the Premiership.