The Christmas weekend brought about some thrilling rugby with full rounds of fixtures being played in the Aviva Premiership, Guinness Pro 12 and the French Top 14.

But who were the standout performers? Here are our selections.

Scarlets-bound Patchell continued his fine form with the Blues, keeping his composure to slot a last-minute penalty to give the Cardiff-based side a dramatic 21-20 Pro12 win over Newport Gwent Dragons on Sunday. The twice-capped 22-year-old Wales internationals all around display was also solid.

The utility back enjoyed a happy 25th Birthday as he played out of his skin while also touching down a crucial score in Leicester Tigers win against Newcastle Falcons. Fans are calling for a new long-term contract for the Tongan and for good reason.

The Scotland international played an integral role in Saracens impressive 26-16 away victory against Wasps. First Taylor latched onto the ball and burst through a tackle to dive over before the centre turned provider as his inside offload to Owen Farrell give the fly-half a clear run to dive over between the posts.

Roberts made a significant contribution on debut as Harlequins and Gloucester shared the spoils 39-39 in a ten-try thriller at Twickenham. The Wales international added strength to the Quins midfield, playing a role in three of the hosts five tries while getting over the gain line and being a constant threat to the Cherry and Whites defence throughout. It was like he had never been away.

New Zealand-born Slade knocked over three penalties for Pau as they eased their relegation fears with an against the odds 15-11 home win against La Rochelle.

The fly-half steered the Exiles to a first win of the season as they overcome Northampton Saints 25-23 on Boxing day, which lifted them off the bottom of the table. Noakes composure and ability to control the tempo of London Irish performance was very impressive while his kicking, for the most part, was splendid, scoring eight crucial points from the tee.

Chudley finished the encounter at Sandy Park with two tries, including a vital second which came less than a minute after Sale went 17-10 ahead, to help the Chiefs prevail 33-17.  You’d think England surely have one eye on the playmaker as he continue to consistently put in fine displays for the Chiefs.

Zanusso thought he had won it for Treviso when he dived over five minutes from time before Zebre stole the vcitory in the dying seconds.  The props overall performance though by itself merits him a place in our starting XV this week.

The veteran Springbok hooker touched down a try and was solid at the lineout as Montpellier romped to a 45-20 win against Agen in the Top 14. Du Plessis, who returned to the side after a few weeks on the sidelines, made his presence felt with a barnstorming run over the try-line from the back of a rolling maul.

Moldovan prop Arhip provided a decisive moment in Ospreys’ 27-26 Pro12 Welsh Boxing Day derby win over Scarlets in Llanelli, showing exception skill to skip down the left touchline and offload to Eli Walker to streak clear in the second half.

Man mountain Itoje needs to be in Eddie Jones England squad. That is the conclusion we took as the incredible young athlete put in yet another outstanding display as Sarries overcame Wasps at the Ricoh Arena.

The Ospreys skipper helped his side battle through an overall frustrating performance to a narrow one point win against their fierce rivals Scarlets. The Wales international second row has become somewhat a regular in the RUCK team of the week with his consistently fantastic displays.

Hardie continued his fine form in Edinburgh’s impressive 23-11 victory over Glasgow Warriors in front of a record crowd. The New Zealand-born flanker joined the club after a solid Rugby World Cup campaign with Scotland and scored a crucial late try at Murrayfield in a brilliant all-action display.

Kvesic showed why people are saying he is ready for an England call as the 23-year-old raged havoc among the Harlequins defence during the eighth big game at Twickenham on Sunday. Up against Chris Robshaw’s Harlequins, the Gloucester openside wowed a 70,718 crowd with 15 tackles and three turnovers in a thrilling 39-39 draw.

Williams’ 76th-minute try ended Connacht’s unbeaten home record this season as Ulster won a closely-fought Guinness PRO12 derby 10-3 at the Sportsground. The Man-of-the-match muscled over from a close-range ruck to decide this inter-provincial clash, handing Connacht their first defeat in eight home games and keeping his own side on the winning trail.

RUCK's Team of the Week
You may also like 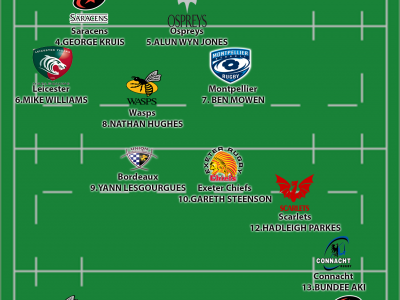