Pool C winners New Zealand put on a show in Newcastle as they beat Tonga on Friday night before Argentina, who finished the same group in second place had a commanding victory against Namibia on Sunday.

But who were the stand-out performers? After much debate here is our final selection – do you agree?

The back showed great leadership qualities when Paul O’Connell was replaced to help Ireland to a famous World Cup victory against France. He was great under the high ball and muscular in defence, and to top it off scored a fine try at a crucial time just after half-time.

Habana appeared to be back to his best as South Africa nilled the USA, moving level with the great Jonah Lomu in the Rugby World Cup try-scoring charts. The Springbok winger touched down a well-deserved hat-trick for all of his hard work.

The young Exeter Chief’s star showed why many people had been calling for him to be played earlier in the tournament with some classy touches and a superb try. He showed no signs of being rushed or flustered at this level.

This performance against France was probably his finest hour in green. The centre’s colossal shift in the second half, where he demonstrated his excellent footwork and pure power saw him break the gain line 15 times, which was more than any other player.

Although Canada lost again, the winger deserves his place among our starting XV. He became just the second player to score in every pool game of a World Cup and overall his performances throughout this Rugby World Cup will have made his country proud despite the bitter disappointment of the Canucks losing all four games

The star of Argentina’s third place finish at the World Cup in 2007 returned to the fold during their win against Namibia on Sunday and reminded everyone of his capabilities as he opened the try-scoring.  This win will probably be his last World Cup appearance for the Pumas with Nicolas Sanchez presumably coming back in for the quarter-final so it was good to see such an iconic figure go out on such a high.

The captain led by example, scoring a record-breaking 26 points against Samoa as he dragged the home nation through to the quarter-finals for the seventh time in their history. A try and 19 points from the tee set a new personal record for the scrum-half in a dark blue jersey, and also made him the leading points scorer in this year’s competition with 60 points.

The prop met a lot of scrum resistance from Tonga but powered back fantastically. Overall he had a dynamic game around the field, playing some nice little passes to keep the All Blacks moving forward.

The hooker offered himself time and again to truck the ball up around the fringes as Ireland continually dominated possession and territory against France. One overthrown lineout in the first half was probably the only error of a phenomenal performance.

The most improved tight-head in world rugby put in another stellar display as Australia beat Wales. He anchored the scrum superbly and seems to be just getting better and better as the tournament goes on. 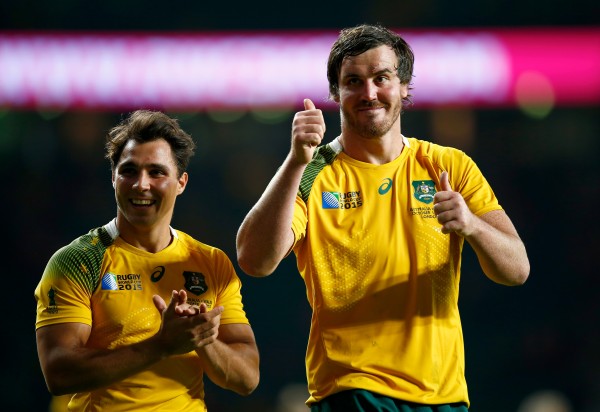 The lock is quickly heading towards world-class status following another outstanding display. His tackling and robust defending were key to Australia hanging on when they had their backs to the wall for long periods of the second half against Wales.

Toner played like a man possessed in the first half against Les Bleus with some big tackles and determined carries. The lock was Imperious at the lineout and played his part as Ireland dominated in the scrum.

A massive team effort kept Wales at bay, but flanker Fardy provided the added force needed to control the scrum as well as making 11 critical tackles throughout the match. Only teammate Kane Douglas made more, but Fardy also won two turnovers. Overall, the Aussie forwards stood defiant until the end.

The flanker’s performance during Ireland’s win against France was nothing short of incredible, with some big hits, crucial turnovers and strong carrying making him the standout player. He also stepped up during the absence of Captain O’Connell to lead the team both in attack and in defence.

The 60-3 win against Uruguay is likely to be the 37-year-olds final game in the white shirt but Easter rolled back the years to impress all in attendance with his positive attitude, strong running and, of course, his hat-trick of tries. It was a perfect way on his farewell to go out. He was just outstanding.