Saracens are through to the final of the European Champions Cup for the second time in three years. The reigning Aviva Premiership champions battled through thanks to Michael Rhodes score and a penalty try combined with 16 points from the boot of Owen Farrell as they dispatched their English rivals Wasps at the Madejski Stadium on Saturday afternoon.

Wasps had struck early through Dan Robson’s scintillating try after 73 seconds, but they barely landed a punch after with Saracens taking a deserved 8-7 lead into the break thanks to Rhodes try and Farrell’s last-gasp penalty in overtime.

Three further penalties from the England number 10 before a converted penalty try was then enough to secure the victory for Sarries.

Two-time champions Wasps refused to lie down and stayed in touch but a late Ashley Johnson try was not enough.

Leicester Tigers will now play Parisians Racing 92 in the second semi-final on Sunday for the right to tackle English champions Saracens in Lens.

Wasps, who went into the game underdogs, caught Sarries cold to get off to the best possible start, with Dan Robson opening the try-scoring after just 73 seconds. Charles Piutau offloaded in the tackle to speedster Christian Wade, who burned two defenders before offloading to the scrum-half to cross in the corner. And Gopperth nailed the conversion to open up a seven-point lead.

Afterwards, it looked like Saracens were going to reply instantly as they dominated possession and territory, but when they did eventually touch down after 17 minutes, it was wiped out. The ball was grubbered through by Owen Farrell with Duncan Taylor dotting down. However, replays showed Chris Ashton shouldered Frank Halai when the Wasps wing was not in possession of the ball, and the TMO disallowed the score. It was harsh, but you could understand why it was ruled out.

Saracens though did eventually get their deserved try just before the half-hour through South African Rhodes. Wasps fly-half Gopperth took an age to clear and was punished as the blindside blocked his kick before racing onto the loose ball, showing composure to collect and carry over the line. Farrell, who missed a simple penalty earlier in the game, was uncharacteristically off target again with a poor conversion attempt, 5-7.

But it was third time lucky for the England fly-half as he slotted a penalty in overtime to give Sarries a slender 8-7 lead at the break.

Farrell continued to rediscover his best form after the restart as he nailed two kicks in the first five minutes of the second half from just inside the Wasps’ half, 14-7.

But a bloodied Farrell though was sent to the bin after 50 minutes for a dangerous tackle on Robson. The Wasps scrum-half ducked into the tackle, but Farrell led with his shoulder, resulting in Robson leaving the field via a stretcher.

Gopperth then slotted the resulting penalty from right in front of the posts to decrease the deficit to four points, 14-10.

Wasps were unable to take advantage of the extra man and were almost made to pay immediately when Farrell lined up a penalty upon his return, but the fly-half was off target.

Dai Youngs men  found themselves down to 14 men after 68 minutes when McIntyre was sent to the bin for a kick to Maro Itoje’s head. Farrell this time extended Saracens lead with the straightforward penalty, 17-10.

And Saracens’ forwards, with the extra man, mauled towards the line soon after before Wasps dragged it down in the corner. Referee Poite then ran underneath the posts to reward the try with Farrell adding the extra, 24-10.

Two-time champions Wasps gave themselves a glimmer of hope after 77 minutes, Elliot Daly breaking through before being dragged down on the line but Johnson was on hand to score. Gopperth kicked the extras but it was not enough as it finished 24-17. 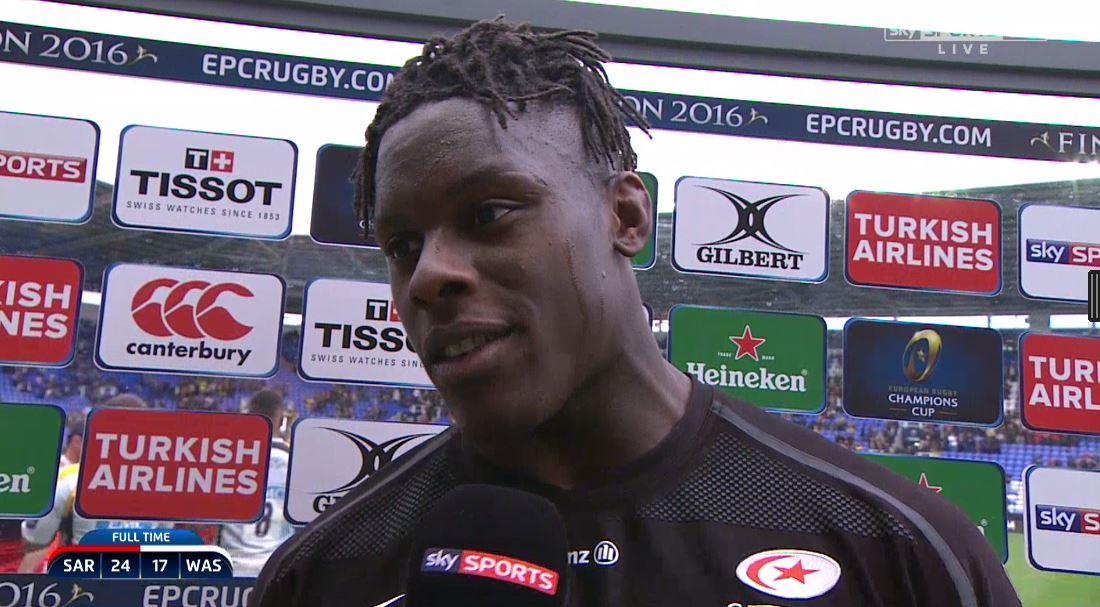 Saracens’ man of the match Maro Itoje speaking to Sky Sports:  “The resilience of the team and the quality of the person in the team helps us control games and come through difficult points in the match.

“Our half-backs run the game – superbly backed by a coaching team. We don’t mind too much who we play in the final; we just want to give a good account of ourselves.”

Another week, another Leicester Tigers departure