England World Cup-winning coach Sir Clive Woodward has picked his England team for next Saturday’s clash against Samoa and it doesn’t include skipper Dylan Hartley and fly-half, George Ford.

Speaking in the aftermath of England’s 30-6 win over Australia, he wants  England to carry on their good form but has made a number of changes.

When discussing the backline, Woodward said he would play Danny Care and Owen Farrell in the half-backs and Henry Slade at No 12.

“It’s a very fast, young exciting team,” said Woodward. “That side will take some stopping if they play well.

“Momentum is huge and England going into 2018 have got huge momentum after that game today, so let’s really keep the team together in terms of the 23 or 25.

“I wouldn’t want to rest Lawes, Launchbury or Itoje as I want to give them a game and see how we can play and start to blow some teams away.

“The guys who have been on the bench need to start in this game. Definitely Sam Simmonds at No 8 and hopefully Sam Underhill is fit to play at No 7.

“I am very excited about that side.

“Even if Care hadn’t have come on [against Australia] today. I would have started Care in the Samoa game anyway. I thought he came on and played well today. You have go to keep your two No 9s competing but also to give him some real game time.

“I want to see Slade have another game on the front foot on the inside centre position and see Owen Farrell at No 10.”

The rapid back three is an area the former England coach is impressed with and he was asked if he believed Anthony Watson was keeping injured Mike Brown’s jersey warm until the Harlequins full-back is fit.

“I don’t think so,” Woodward responded. “Brown’s got to get back in the team. I think Watson is at his best at full-back, he made a couple of errors but the upside far outweighed the downside to me. 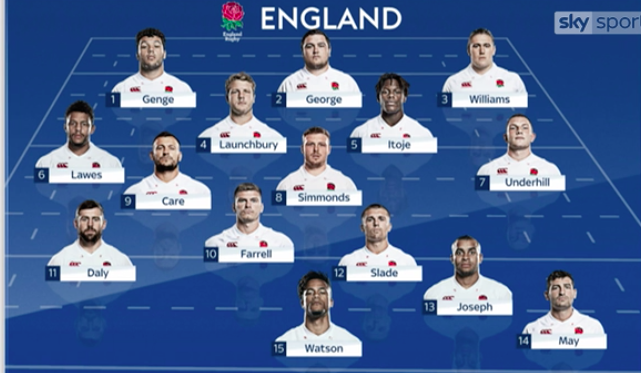 “I think Brown at his very best may break into that back three.The back three has this wonderful thing called pace.

“Make no mistake Samoa will not just be a walkover but you have to use these three autumn internationals,” he added.

“Now that you have got this big win today against Australia. I think you can not even call it experimenting, it’s giving them a game seeing how good they are at the next level up.”