England prop Joe Marler says he is retiring from international rugby at the age of 28 to spend more time with his family.

“Being with England you have to spend an incredible amount of time away and I could not do that any more,” he said.

“It is an incredible commitment to play rugby for England and I strongly believe that if you are unable to give yourself fully to it then it is time to step away – otherwise it would not be fair on the team, or my family.

“It has been an honour and a privilege to represent my country and of course this has been a very difficult decision to make.”

Here’s how social media has reacted:

Quite the blow if the Joe Marler international retirement news is accurate. Underrated at his best and a lightning rod for criticism during dips in form, he’s really been very solid for England. Competition to back-up Mako is wide open.

Big rugby news to be confirmed tonight – @EnglandRugby prop forward Joe Marler retires from international rugby – at the age of 28.

Marler’s Test retirement a real shame, but hard not to respect him making such a big decision at only 28 and with a RWC on the horizon. Formed a hell of a tandem with Mako.

Never would I question a pro rugby players commitment, but surprised at Joe Marler’s retirement from international duty a year out from the #RugbyWorldCup

Apparently Marler’s decision is based on the amount of time that England duty consumes and being away from home.

That’s fair enough when you have a young family. Fair play to him.

Marler retirement thoughts:
1. Very surprised by this with a World Cup 1 year away, the perfect time to retire
2. Players now joining the exodus from Jones’ regime
3. 🤞Genge can stay fit and be an asset off the bench https://t.co/2eIGEKdQl0 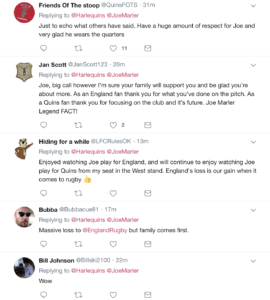 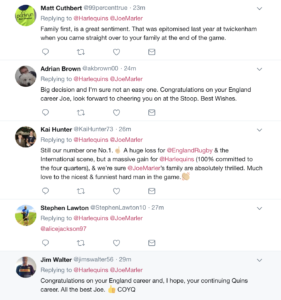