In the build up to this afternoons Rugby World Cup semi-final we look back at some of the most exciting clashes between New Zealand and South Africa down the year’s.

Surprisingly enough, plenty is known about this game and it remains one of the most remarkable in Rugby Union history – the extreme rarity of a 0-0 draw in the sport. It remains the only 0-0 draw – the third tie in history – between these two international sides.

It was the third of three tests as South Africa toured New New Zealand, following immediately on from a similar series in Australia. It was played at Athletic Park in Wellington, a ground which stood until 1999, and an estimated 35,000 people attended the game. 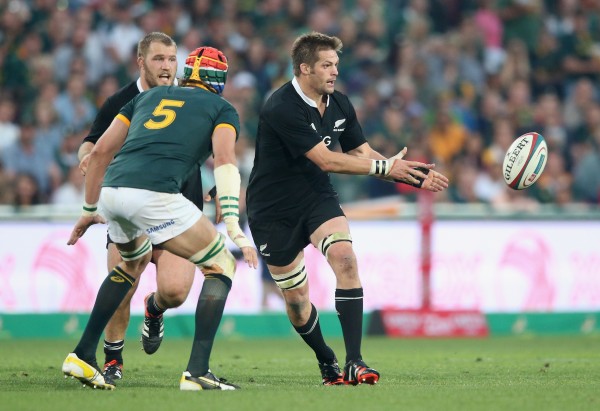 In this tie last year, All Blacks captain Richie McCaw scored a second-half try to help the All Blacks maintain their five-year unbeaten record in New Zealand with a hard-fought victory over the Springboks in the Rugby Championship.

McCaw took advantage of a pin-point cross-field kick from Aaron Cruden which was hauled in by number eight Kieran Read who fed his skipper for a dive to the corner.

Inexperienced South Africa fly-half Handre Pollard set up Cornal Hendricks for a first-half try with a stunning inside pass before converting and slotting in a long-range drop goal.

But Cruden slotted two further penalties for the home side while Beauden Barrett added another to extend the All Blacks’ unbeaten home run to 36 games.

South Africa coach Jake White hailed this as his side’s ‘greatest win’ as centre Marius Joubert scored a superb hat-trick to give his side a stunning bonus-point victory over the All Blacks at Ellis Park.

Despite going 10-0 behind early on, the Springboks went into the break 19-13 ahead thanks to two scores from Joubert added to one from Breyton Paulse.

Joe Rokocoko powered his way over to put the All Blacks ahead again, but Jean de Villiers replied for the home side and the memorable triumph was sealed late on when Joubert, now aged 36 and still competing with Super 15’s Natal Sharks, completed his treble on 76 minutes. 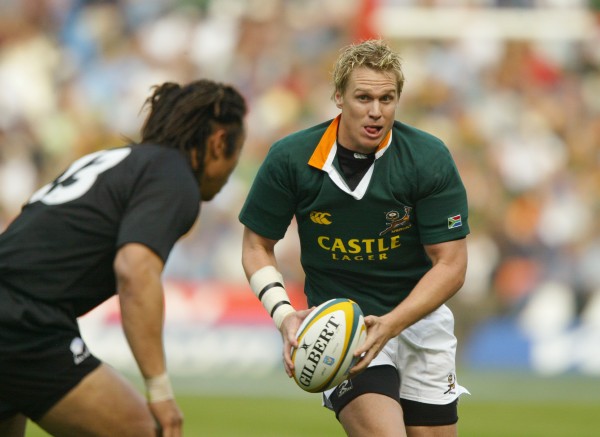 While not a typical ‘classic’ this proved to be one of the most memorable team performances in Rugby history, while it will forever be remembered by South Africa for all the wrong reasons.

The visitors scored seven tries to one as the Springboks failed to cope with the All Blacks’ far superior power. The final whistle marked one of the lowest points in South Africa’s rugby history as home fans were left to contemplate a record losing margin – as well as number of tries conceded – against New Zealand.

Less than a year on from their biggest ever defeat – a 53-3 defeat against England in November 2002 – Springboks coach Rudolph Straeuli said, ” It’s devastating for us to lose in this way” as New Zealand’s outstanding handling skills came to the fore.

Joe Rokocoko and Doug Howlett led the way with two tries each, while Kees Meeuws and Aaron Mauger also got over, alongside a try and six goals from Carlos Spencer, meaning Ashwin Willemse’s debut try and Louis Koen’s four goals had little effect on the outcome.

Arguably one of the greatest games in Rugby history when contemplating all the antiquity and politics which went with it.

South Africa hadn’t beaten New Zealand in 14 years prior to this final and, as the hosts of that year’s World Cup, their performances were often criticised as the country went through a difficult period politically.

But, against the odds, having been unable to compete in the previous two World Cups, they made the final in their first ever involvement in the competition, where they repeatedly dismissed the All Black’s expansive play as a try-less but dramatic finale unfolded.

Though Andrew Mehrtens put the visiting side ahead after three minutes, Joel Stransky leveled and the pair traded penalty kicks once more before Stransky’s drop goal handed the host nation a 9-6 interval lead.

Mehtens hit back with a drop goal of his own to make it nine apiece soon after the restart before missing a late drop goal attempt, meaning, for the first time, the final would be decided in extra time.

Mehrtens made amends for his miss by striking a long-range penalty in the first period but Stransky hit back before, seven minutes from time, he scored the final and decisive points of the match, hammering over a 30-metre drop goal to seal his side’s first of two World Cup crowns to date.