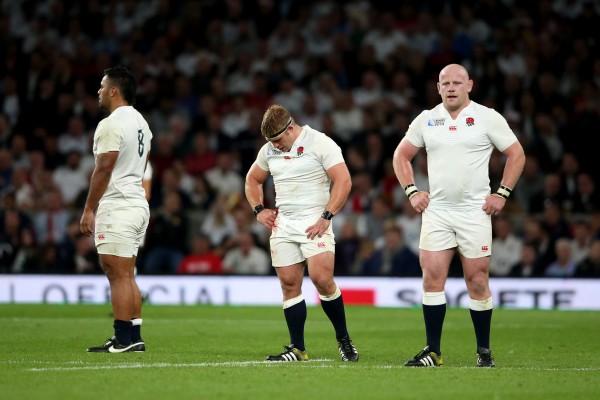 Tom Youngs: England Captain Robshaw has backing of the players

Hooker Tom Youngs has come to the aid of Chris Robshaw, insisting that he and the squad are fully behind the Captain heading towards their must-win clash with Australia at Twickenham on Saturday.

Stuart Lancaster’s men, who at one point led by ten points, were rocked by an unexpected 28-25 defeat against Wales in South-West London this past weekend.

The men in white now must avoid defeat against the Wallabies to ensure they avoid becoming the first host nation in Rugby World Cup history to be eliminated during the Pool stages.

Captain Robshaw has been  individually targetted with criticism following the loss owing to his decision to go for the corner instead of taking the draw. The risk is wondrous when it works, but it leaves you looking rather ridiculous when you come away fruitless and lose the game.

But when Youngs was asked if the Skipper would now have the weight of the world on his shoulders, the hooker replied: “Not from us he won’t.

And although the number 2 accepted that things had gone wrong for England he reiterated his belief in the group.

“Obviously with a 10-point lead, you’ve got to look back and see where it went wrong,” Youngs said.

“Yeah there was so much at stake, and we have a massive challenge next weekend so we have to get rid of what happened and move on as quickly as we can.

“I’m very convinced we can still make the quarter-finals. What gives me that belief is all the hard work we’ve done over the last 12 to 13 weeks and all the work we’ve done before that.

“We’re a tight-knit group. It’s a challenge and one we’ll accept and look forward to.”